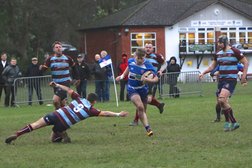 Jack Newton Taylor wins this tremendous match at the death with a try for Leek to clinch a hat trick of tries for the mercurial full back.

This game had all the makings of a close encounter, if the earlier game at Camp Hill was any guide, and it lived up to expectations as Leek welcomed back a number of players to 1st team duty.

Jack Newton Taylor, Tom Scragg and Adam Varley were the back 3 with Sam Hunt and Will Graham in the centres. Dan Needham and Ollie Dew were at half back.
Bobby Cheadle, Ed Cheadle and Joe Newton Taylor were in the front row with skipper Luke Hardern and Jake Hartley at lock.
Joel Booth was back at No.8 and George Hunt, having played several matches in the centre to alleviate unavailability and injury, was back on the flank with Billy Kidd.
Lewis Dunleavy, Tom Fairhurst and Isaac Reaney were on the bench.

The pitch was in great condition as the match kicked off with the weather playing no part in the game and Leek were quickly on the score board. Winning a penalty for offside in the 3rd minute, Sam Hunt kicked for the lineout on Camp Hill's 5 metre line on the right. A catch by George Hunt in the line and then a forwards drive to the line allowed Ed Cheadle to touch down. Sam Hunt kicked the conversion and Leek led 7-0.

Camp Hill were level on 12 minutes after winning a penalty for offside on their right. The lineout on the Leek 22 led to a couple of rucks and then the ball sped left along the backs and with the full back in the line, the wing rounded Leek's last defender to score in the left corner. The fly half converted superbly to level at 7 all.

Camp Hill started to dominate now and on 21 minutes the flanker made a strong run through some poor tackling to the Leek 22. With Leek chasing back, another couple of rucks had the defence sucked in and then the fly half kicked a delightful chip over the line to touch down under the posts. His conversion was good and Camp Hill led 7-14.
From the kick-off, Jack Newton Taylor caught the ball on the left and weaved his way to within 5 metres of the Camp Hill line. Joe Newton Taylor was then held up over the line for a Leek scrum. This led to scrum dominance for Leek and Camp Hill were penalised twice but as Leek pressed in the ruck, Camp Hill's defence held and they won a penalty for holding on to clear.
The game was intense as the forwards butted up against each other with Camps backs looking dangerous and Leek's defence holding but gradually Leek were finding holes and on 38 minutes Leek were again deep in the Camp Hill 22 when the clearance kick to about half way on the Leek left was fielded by Tom Scragg. He combined with Jack Newton Taylor who then fed Will Graham. The young centre then sprinted past and through tackles on the left to near the Camp Hill line. He set the ball up in the ruck and then Joel Booth and Bill Kidd combined to set up a ruck nearer the posts from which Joel Booth fed Joe Newton Taylor and the big prop crashed over the line for Leek's 2nd try. Sam Hunt converted and it was 14 all on 40 minutes.

Still time for 2 more tries before half time!
From the kick-off, Camp Hill retained the ball and poor tackling again led to a penalty on Leek's 22. The quickly taken kick had Leek scrambling to cover but the Camp Hill backs were sharp and the centre scored the visitors 3rd try. The conversion missed but Camp Hill took the lead at 14-19 as the game entered added time at the end of the 1st half.
Touché from the kick off as Leek retained possession this time on their right. The ball was quickly fed through hands left and Jack Newton Taylor was on hand to sprint past the last 2 defenders and touch down in the left corner. Sam Hunt's conversion just failed as the half time whistle blew with the teams locked at 19 all and 3 tries all.

3 minutes into the 2nd half and Camp Hill had their 4th and bonus point try. Leek conceded a penalty for not releasing in the tackle and Camp Hill worked an overlap again and the wing scored his 2nd try. The conversion missed but Camp Hill led for the 3rd time at 19-24.
Leek came back strongly and may have scored in the 47th minute but poor passing and then offside led to Camp Hill clearing but Leek won the lineout on half way and the forwards changed tactic and drove a full 15 metres up field winning a penalty in the process on 49 minutes. Opting to kick for the lineout in the Camp Hill 22 on the left, another good catch and drive led to a strong maul and Leek's 4th try for their bonus point as young Jake Hartley scored. Sam Hunt's conversion just missed and the sides were locked at 24 all on 50 minutes.
Camp Hill then came back strongly for the next 15 minutes and they scored 2 penalties in that time through the boot of the fly half. Will Graham has to be commended for his superb combative skills in defence, ripping ball and tackling the tide of Camp Hill backs coming his way, especially his opposite number and both of them were to be yellow carded later in the game as the intensity grew.

The 2nd penalty for not releasing in the tackle led to Camp Hill leading 24-30 on the 68th minute but Leek weren't done as they hit back in the 71st minute for their 5th try and Jack Newton Taylor's 2nd. See attached photo of him splitting defenders to score this try). Leek won a penalty for a high tackle but then lost the lineout and Camp Hill cleared for another Leek line. This time successful and then some quick rucking left had allowed Luke Hardern in support on the right. His pass over the top to Jack Newton Taylor allowed the full back then to cut back inside to score a great try. Sam Hunt converted and Leek led 31-30 with less than 10 minutes of the running clock to play.
Disaster struck for Leek on 76 minutes when Will Graham was yellow carded after an incident with his opposite man after not rolling from the tackle and the Camp Hill fly half elected to kick for goal from wide left on Leek's 22. His unerring boot kicked Camp Hill into the lead once more at 31-33 and it looked a tall order now for Leek, down to 14 men.

Already in added time now, Camp Hill were reduced to 14 men as the centre was yellow carded but Leek found themselves on their own 5 metre line after the visitors kicked the ball rather than run it as the last minute loomed.
The lineout won, Leek knew they had to run the ball out of defence. They then won a penalty as the Camp Hill front row came up at the next scrum on their own 10 metre line. It was the last play as Joel Booth took the quick penalty from behind the scrum. Good retention and Leek was probing on the Camp Hill 22 on the left when the defence forced Isaac Reaney into a hurried pass. As the ball bounced towards the left touch, Jack Newton Taylor collected it as the defence ran to him. He quickly ran laterally to avoid those two defenders and then started straightening but still running to the right where his only support was right winger Adam Varley. As the speeding full back gathered pace, the defence started to split and Taylor enticed the centre and wing with a dummy to Varley before turning in between them and heading for the line and a quite dramatic ending to a game as he touched down for his 3rd try and the winning score. (See photo of the touch down with supporters already celebrating)
Sam Hunt couldn't quite make the conversion but it didn't matter as the final whistle blew then and Leek had snatched the win at the death by 36-33.

What a game it had been. Easily the most exciting of the season at Esterchem Park as Leek maintained their unbeaten home league record this season. Both sides contributed to a fine match played in the right spirit and man of the match Jack Newton Taylor was on fire as the Leek youngsters showed what they could do. Will Graham was outstanding and so too were Jake Hartley and Lewis Dunleavy.
The scrum was solid with Joel Booth back at 8, George Hunt at 7 and skipper Luke Hardern back at lock after a few weeks where some specialists had to play out of position. The lineout went well for Ed Cheadle and the loose forwards were excellent. In the backs, better defence than last week and more adventure with ball in hand will hopefully bode well for this week's Staffordshire Cup clash away at Tamworth.

Leek retained 6th spot on 38 points. Ludlow beat Walsall and Tamworth beat Stafford to retain 1st and 2nd places respectively. Wolverhampton, in 3rd place, were beaten at Crewe who are the form side in the league having won their last 6 games in a row including beating all 3 top sides. So Leek will have to be at their very best to compete with the Cheshire side when the league resumes on 26th January.
Both the next 2 games are away and kick-off is at 2.15pm.
Next league game at Esterchem Park is on February 2nd when the Moorlanders welcome Wolverhampton to Esterchem Park. KO 2.15pm
Author John McDermott