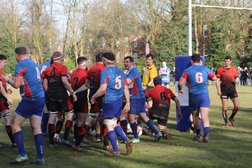 Leek stunned the league leaders to record a bonus point win and confirm the upward trend in form and results....

....with a determined performance at Esterchem Park on Saturday.
With almost the entire senior squad available, Leek could field a team capable of competing with the league's best and tactically decided to start with Sam Hunt at full back with Jack Newton Taylor on the left wing and youngster Jack Lawlor on the right wing.
Will Graham and Nick Palmer were in the centres and Isaac Reaney and Dan Needham at half back.
Joe Newton Taylor, Ed Cheadle and Bobby Cheadle made up the front row with Luke Harden and Andy McFadden at lock. Jake Bainbridge, Joel Booth and George Hunt made up an experienced back row with Andy Thompson, Tom Fairhurst and Ollie Drew on the bench.

On a glorious afternoon with a firm pitch to suit the runners, Leek faced the sun and wind in the first half as Ludlow pressed early trying to get their pacey backs into the game and although a poor pass hit the ground on 9 minutes, the alert centre collected it and passed to the left wing who found himself open and sprinted under the posts. The conversion was good and the visitors led 0-7.
Still Ludlow pressed but Leek getting some ball and looking to work an opening themselves when on 15 minutes with Ludlow inside Leek's 22, the Leek backs decided to try their luck and run out of defence.
As the ball arrived with Nick Palmer, he ghosted between two would be tacklers before offloading to Jack Newton Taylor on the left and he sprinted in from 70 metres. Isaac Reaney converted and the sides were level at 7 all.

Parity lasted 3 minutes as Leek ran the ball left to right but a wayward chip through kick only found the grateful arms of the left wing again and one sidestep and hand off later and he was sprinting in by the posts. The conversion was good and Ludlow led on 18 minutes 7-14.
On 21 minutes, Sam Hunt missed a penalty as Ludlow was penalised for holding on in the tackle and the next 15 minutes saw a titanic battle in midfield as the Leek forwards tried to wrestle the initiative as Ludlow tried to recycle quickly. It was high quality stuff and the deadlock was broken when Leek won a penalty on 34 minutes at the scrum. This was to be the winning theme of the day as the powerful Leek pack dominated the set phase. Sam Hunt kicked for the lineout on the right about 10 metres from the Ludlow line. Ludlow didn't engage at the lineout and Leek's pack quickly resorted to rucking with Bobby Cheadle held up over the line.
From the scrum, the Leek 8 shoved Ludlow back to the line and Dan Needham was on hand to touch down. (See attached photo with the ball and Dan on the Ludlow line). Isaac Reaney converted and Leek drew level at 14 all on 36 minutes.

On 39 minutes, from a scrum on half way, Dan Needham's clever pass through his legs set Jack Newton Taylor off down the left wing. His chip ahead saw the ball bounce into touch on Ludlow's 22 but then the wing was yellow carded for not releasing the ball.
As the half entered added time, another Leek scrum elicited a penalty and again Sam Hunt kicked for the lineout on the left this time 10 metres from the Ludlow line. This time a Ludlow forward engaged but Leek swiftly got into maul shape and the forwards drove over for Joel Booth to touch down. The conversion missed and the half time whistle blew with Leek taking the lead for the first time at 19-14.

Ludlow started the 2nd half as the first and were on the board with their 3rd try after 47 minutes when from a lineout on the left, quick ball right created an overlap and the wing scored in the corner. The conversion slipped just wide and it was all square at 19 all.
On 51 minutes, Leek's scrum won another penalty and from the lineout this time, Ludlow's defence held but 4 minutes later at the next scrum, Ludlow's prop was yellow carded and the kick for the line this time landed on Ludlow's 5 metre line. A catch and superbly organised and patient drive eventually led to Joel Booth scoring his 2nd try. Reaney's conversion missed but Leek led 24-19. Leek then upped their forward pressure winning another penalty on 61 minutes for a lineout offence on half way. The resulting penalty led to another lineout on Ludlow's 22 on the right. Leek's catch and driving maul almost made it to the Ludlow line but with a couple of desperate infringements, the penalty was coming and Leek opted for the scrum. Leek's scrum worked its way to the Ludlow line before the referee awarded the penalty try as Ludlow's pack tried to stop the drive illegally. 31-19 on 65 minutes. Back came Ludlow after a high tackle gave them a penalty on 68 minutes and the kick for the lineout on Leek's 22 on the right gave the visitors the opportunity to run the ball left then back into centre field for a couple of quick rucks that created the overlap on the right for the try to be scored. The conversion was good and at 31-26 with 10 minutes to go, the game was set up for a battle to the end with the pace unrelenting. On 74 minutes Ludlow were pressing in Leek's 22 when a crunching tackle from Ed Cheadle forced a knock on and a consequent injury to a Ludlow forward.

With Ludlow throwing everything at Leek, Jack Newton Taylor suffered a 2nd yellow card for a deliberate knock on and two further penalties came the visitors way as they sought to find a way through the tough Leek defence. Try as they might though Leek held firm and the final play saw the ball in touch from a long pass in Leek's 22.
It had been a high quality, fast paced encounter and Leek edged it 5 tries to 4 with the superb Leek pack the key to success. Led by Ed Cheadle, Luke Harden and Joel Booth, the relentless pressure on the Ludlow 8 just starved the Ludlow backs enough to enable the Leek 8 to accurately score their tries from the set plays. Joe Newton Taylor, Bobby Cheadle, Andy McFadden, Jake Bainbridge, George Hunt and Andy Thompson deserve all the credit for an outstanding unit performance.

The win sees Leek move up to 4th (49 points)but 11 points adrift of Wolverhampton in 3rd (60 points). Tamworth crept a bit closer to Ludlow at the top but Ludlow on 68 points lead Tamworth on 62 points by over a game. Camp Hill, Crewe and Newcastle sit right behind Leek.

This Saturday is a non-league weekend with Leek hosting Wolverhampton in the Staffordshire Intermediate Cup semi-final at EsterChem Park. Kick-off is at 2.15pm.
There are 3 home matches this weekend, so it will be very busy. Get down early, watch the games and then settle in the clubhouse for the 6 Nations Grand Slammer, Wales v England at 4.45pm, live on the big screens.
Author John McDermott