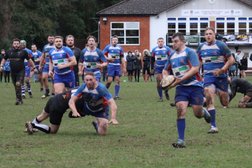 Leek left it late to overcome a spirited Spartans squad at EsterChem Park on Saturday….

….scoring 3 tries in the final 12rr minutes to secure a bonus point and keep up the pressure on the 3 teams above them in the league with 4 games to play.

Jack Newton Taylor was back at full back with Kini Buli and Adam Varley on the wings. Tom Scragg and Sam Hunt were in the centres. Isaac Reaney and Ollie Drew were at half back. Joe Newton Taylor, Ed Cheadle and Bobby Cheadle were in the front row with Luke Hardern and Andy McFadden at lock. George Hunt was back on the flank after a couple of weeks off injured with Joel Booth and Jack Lawlor making up the back row. Jake Bainbridge, Billy Kidd and Dan Needham were on the bench.

Leek's usual composure at lineout time deserted them in the opening quarter as they lost 4 in a row and only a last ditch touch down on 14 minutes by Jack Newton Taylor after the Spartan centre kicked ahead prevented the visitors from opening the scoring. The game was open with both sides trying to unlock an opening when on 19 minutes Leek won a penalty for offside and the kick for the lineout was on Spartans 5 metre line on the left. A quick line and Joel Booth crashed over but the referee spotted obstruction and Spartans cleared.
It took until the 27th minute for Leek to break the deadlock when a high tackle gave Sam Hunt the opportunity to convert the penalty attempt from the Spartan 22 and he duly obliged. 3-0.

3 minutes later and Spartans drew level when they won a penalty at the scrum on Leek's 22 for losing the binding. The fly half kicked confidently and it was 3 all on 30 minutes.
It took Spartans only another 3 minutes to take the lead when they had a lineout on the halfway on their right. The forwards mauled well from it and then good passing allowed the classy full back to come into the line. His pace was too much for the Leek outside backs and he sprinted in on the left. The conversion was good and the visitors led 3-10 on 38 minutes.
Leek's discipline then wavered as a penalty and then 10 metres for backchat gave Spartans a lineout on Leek's 22 but Leek stopped the drive and won their own penalty to relieve the pressure. The half ended with an opportunity for Leek from the lineout but again a poor execution led to lost ball as Spartans kicked the ball dead to end the half leading 3-10.

Coaches Lee Pickles and Chris Mudd had their work cut out to inspire the Leek squad to play their game at the level of the past few weeks and it duly worked as from the kick-off, possession was retained by Andy McFadden. As he was flattened, advantage was played on Leek's 22 and the backs sprinted out left to right, after a couple of rucks, with Jack Newton Taylor and Kini Buli taking the ball up the right touch and into the Spartans 22. Leek created a couple of rucks on the right before the ball was passed to what looked like a 3 on 1 overlap only for the ball to come back inside to create another ruck before Joe Newton Taylor crashed over for his remarkable 15th try of the season. Not bad for a prop. Sam Hunt converted and Leek drew level at 10 all on 43 minutes.

Spartans had an opportunity on 48 minutes winning a couple of penalties in the Leek 22 and opting to scrum. As the ball passed left, Leek's drift defence pushed man and ball into touch and then cleared from the line.
It was a good game with both sides now seeking to land the blow that would take the lead. Again Spartans threatened on 51 minutes with the scrum half breaking from the scrum and the full back getting to the Leek 5 metre line. A penalty came for in at the side but Leek got the nudge on and when the ball came out Adam Varley got his hands on the ball and Leek cleared. Then on 59 minutes Leek won a penalty on Spartans 22 following a break by Ollie Drew. Sam Hunt converted to edge Leek into a 13-10 lead. It lasted 4 minutes as Spartans 10 kicked a penalty for offside on 63 minutes. 13 all.

On 67 minutes the Hunt bothers combined well to set up a position near the Spartans line when George Hunt was held up over the line after a strong run by skipper Luke Hardern.
At the scrum, Leek won a penalty as the Spartans pack rotated it and a quick tap by Dan Needham set up the crash ball for Tom Scragg and the powerful centre charged over the line to score on 69 minutes. Sam Hunt missed the conversion but Leek led 18-13.
From the kick off, Leek ran the ball out with Adam Varley crashing through tackles. Bobby Cheadle, (see photo attached with 9 colleagues looking on!), made 2 dummies as the prop set up the ruck near the posts. The ball sped out and Luke Hardern took the pass to score but it was deemed forward on 71 minutes. The Spartan scrum put in was adjudged not straight and from Leek's put in, Joel Booth picked up, Tom Scragg sprinted on and the pass to Kini Buli on the right wing allowed him to score unopposed on 74 minutes. Sam Hunt's conversion missed but at 23-13 with 6 minutes to play, Leek still had a chance to score a 4th try as Spartans tired and with injury taking its toll, Leek sensed the opportunity.

On 77 minutes a clearance kick only found Sam Hunt on the right and his pass to Jack Newton Taylor had the full back sprinting round the defence. Only a last ditch tackle by the brave Spartan 10 prevented the score on the left. The resulting lineout to Spartans led only to more Leek possession and when an offside penalty came Leek's way on 80 minutes, it was the chance to put the ball into touch inside Spartans 22 on the left. The catch won by Billy Kidd then had the organised maul on its way towards the Spartan line and with Andy McFadden now with possession he touched down under a crowd of bodies to secure the 4th and bonus point try right at the end. (see attached celebration of the 4th try). Sam Hunt's conversion was excellent and the game ended there at 30-13.

It had been a highly competitive match with Spartans right in the game until the 74th minute 3rd try really. The visitors were dangerous in attack and their scrum and line worked well particularly in the `1st half.
Leek learned quite a lot about themselves during this game and they have a week's rest now before the away fixture at Stafford. With Stafford in the thick of a relegation battle themselves, the game couldn't be more delicately balanced with the county town side the only team to gain parity with Leek at Ester Chem Park this season.
It is to be hoped that the enthusiasm and desire to win will ensure good turnouts at training as there is still an outside chance of finishing 3rd or 2nd depending on the last 4 games' results although those positions are in the hands of Tamworth and Wolverhampton.

After Stafford on March 23rd, Tamworth visit EsterChem Park on March 30th before an away trip to Telford on April 6th and the final match of the league season at home to Veseyans on April 13th. All KOs 3pm.

Ludlow retained top spot on Saturday with a home win against Newcastle whilst 2nd placed Tamworth went down at Camp Hill. Wolverhampton in 3rd beat Veseyans to retain a 6 point gap over Leek. Tamworth in 2nd are 9 points in front of Leek with 4 games to play.