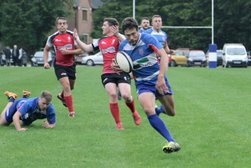 Leek improved again to record a fine win against Walsall in the league scoring 5 converted tries and 3 penalties to 2 tries.

Sam Hunt's 23 point haul
The win keeps them in touch at the top of the table on a day that saw both remaining unbeaten sides lose their records.

On a perfect autumnal day, Leek had picked a strong squad with returning Sam Hunt starting at full back alongside Kini Buli and Jack Newton Taylor on the wings.
Tom Scragg and Adam Varley were in the centre and Isaac Reaney and Ollie Drew at half back.
Skipper Ed Cheadle was supported by props Joe Newton Taylor and Lewis Dunleavy in the front row. Luke Hardern and Joel Booth were at lock. Reece Milner started at No.8 with George Hunt and Tom Fairhurst on the flanks. Will Midwinter, Billie Kidd and Bobby Cheadle were on the bench.

Sam Hunt opened the scoring on 2 minutes with a penalty for offside, 3-0, but Walsall hit back 4 minutes later with their first foray into Leek's half leading to rucks near Leek's line on the right and a simple try outflanking the Leek defence. The conversion missed but Walsall led 3-5.
Leek were back in front on 11 minutes with another successful Sam Hunt penalty for another offside offence, 6-5, and then Walsall missed a chance to retake the lead after a high tackle gave a long range opportunity on 13 minutes.
Leek then started to put phases together which led to a 20th minute try for Sam Hunt under the posts. The final offload from Jack Newton Taylor had broken the last line of defence after great continuity from the forwards starting in their own half. Sam converted to increase Leek's lead to 13-5. (See attached photos showing JNT's offload and Sam Hunt going in under the posts)

6 minutes later and a clever cross kick from Isaac Reaney found Jack Newton Taylor. The inside pass to Sam Hunt was unfortunately knocked on with the line begging but a minute later Leek had won the scrum on the Walsall 5 metre line and great hands with Taylor coming off his wing to create the overlap saw him combine again with Sam Hunt as the full back sprinted in by the posts for his 2nd try. His conversion was good and Leek was up to 20-5 with 27 minutes on the clock.
The 3rd try came on 33 minutes following a penalty at the lineout and the kick by Hunt for the lineout near Walsall's line led to a catch and drive which enabled Tom Fairhurst to crash over for his first senior try. Hunt's conversion was good and the score moved to 27-5.
The half ended with a Walsall penalty attempt as Leek were penalised at the scrum but the kick fell short and the half time whistle blew with Leek in charge at 27-5.

The 2nd half opened with Sam Hunt on target with his 3rd penalty on 44 minutes as Walsall were penalised for hands in the ruck. 30-5.
On 47 minutes Adam Varley almost scored in the right corner but knocked on. However Leek's powerful scrum meant the clearance kick was rushed and the ball was collected by Tom Scragg. His run then set up Adam Varley to sprint in by the posts. Sam Hunt converted and Leek were up to 37-5 with the try bonus point as well.
3 minutes later and Luke Hardern was yellow carded for a no arm tackle and there ensued 20 minutes of play with Walsall in command of the ball as Leek defended mainly in their own 22, committing a series of offences from which Walsall's lineout tried to secure a platform for a try but each time the attack was repelled and despite being lucky to survive without a team yellow, it was Leek then that applied the killer blow on 71 minutes
.
A lineout on their own 10 metre line led to a ruck on the right. On the blindside wing, Jack Newton Taylor collected the ball and his dazzling footwork took him outside and inside a number of defenders before straightening up for the sprint to the line. It was a remarkable score which was converted by Sam Hunt to lift Leek to 44-5.
Billie Kidd was carded for obstruction late on and Walsall had the final say on 82 minutes when their backs strung together a move across the line for the right wing to score in the corner. The conversion missed and full time came with the final score of 44-10.

Leek's first half had been excellent and Walsall's determination in the 2nd half led to an absorbing contest and both sides should improve again from this.

This Saturday sees the Moorlanders away at Long Eaton, leaders of Midlands 2 East (N), with 3 wins from 3 matches, in the 3rd round (last 16) of the Midlands Intermediate Cup. KO is 3pm. Please come and support the team if you can.

The Midlands 2 West (N) league is certainly competitive with all teams now having lost at least 1 match after only 3 games. Both Camp Hill and Stafford lost respectively to Wolverhampton and Moseley Oak meaning Wolves top the league with 12 points. Camp Hill, Stafford, Leek, Newcastle and Longton all on 10 points follow with a 3 point gap to Moseley Oak on 7 points.