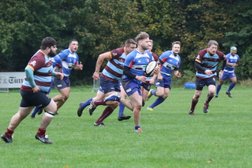 Leek RUFC 1XV moved to the top of the league table after a 27-17 win against promotion challengers Camp Hill at Esterchem Park last Saturday.

After the heavy rain from the previous 24hrs this was one of only 3 games that were played over the weekend with in the league, which highlights the efforts that the club and groundsman have put into the pitch over the past few years. Head Coach , Lee Pickles , made one change from last week to the pack bringing in experienced Andy McFadden at flanker with the rest unchanged from the previous starts. The back line also remained unchanged along with the subs bench from the game versus Burntwood the previous weekend , which is allowing for the squad to develop some excellent understanding

Leek started brightly against a powerful Camp Hill team and after 6 minutes it looked like centre, James Floyd had scored but the referee decided he had made a double move . From the resulting scrum which Leek lost CH were able to clear their lines. However on 8 minutes, on the half way line, Leek won a line out again from some excellent jumping from George Hunt with the ball moved to lock Joel Booth , who passed to the fly half , Isaac Reaney to make a dissecting run between CH centres . He was closely supported by lock , Luke Hardern, who was running at speed from 20 metres from the try line to go over to make the first score which was duly converted by Sam Hunt to take a 7-0 lead. From the resulting kick off, CH were able to secure the ball and make ground into Leek 10 metre line which leek resolutely defended with some excellent tackling from the whole team.

For the next 20 minutes both sides were attempting to gain ground however both teams were playing some tough tackling rugby with some excellent disciplined defence. On 30 minutes the coach made tactical change and replaced centre Adam Varley with Narawa who had an immediate impact after a strong run from the half way line he was able to gain ground and pass to Hardern down the wing who made a powerful run and with an inside pass to supporting number 8, Reece Milner to score an excellent try which was again excellently converted by Hunt. Again from the kick off Leek spilled the ball but Leek won the scrum against the head for Leek to clear the lines . The scrum worked very well all after
noon, however the kicking from hand requires some additional work over the coming weeks. On 35 minutes CH were awarded a penalty from 30 metres which they converted well and from a poor Leek kick off, McFadden was sinbinned for an infringement.

This allowed CH to gain some territory but with Leek defending with 14 men they were able to take a 14-3 lead into half time .Immediately from the Leek kick off they were able to secure the ball and get it into the hands of winger , Jack Newton -Taylor, who went on one his trademark jinking 50 metre runs and with some excellent support play from scrum half , Ollie Drew, he was able to pass it into his hands for him to run hard for 15 metres to score an excellent try under the posts , which again was converted to take a 21-3 lead .

On return of McFadden onto the pitch Leek lost prop , Newton Taylor for another yellow card and for the next 20 minutes Leek played with 14 men as they also lost lock , Booth, for a dubious yellow . This disrupted Leeks play however they defended excellent but on 65 minutes CH scored from 8 metres with well managed scrum to bring the score to 21-10 . Leek were able to regroup and after some excellent disciplined forward play they were awarded a penalty which Hunt excellently converted on 28 metres and from a tough angle to take 24-10 lead. Unfortunately due to the number advantage in the forwards CH were then were awarded a push over try to bring the score to 24-17, however Leek were now playing with 15 men and with some positional changes made by coach Pickles, the players were able to gain further control and they sought out the bonus try . With a few minutes remaining Leek were awarded another penalty in front of the posts which Hunt again kicked and with time ending the squad came out 27-17 winners. This had been an excellent test against further promotional contenders. Post match head coach, Lee Pickles, stated “I was pleased with our structure both in defence and attack against a strong Camp Hill side, we now have a 2 week rest to keep working on some fine tuning “

No other senior games were played last weekend, however Leek under 18 ladies had another fine win Versus Barker Butts to take 7 wins from 7. The club will be open from 8am Saturday 2nd November to show the England v South Africa Rugby World Cup Final with food on offer and later from 6pm with the club bonfire and firework display. There are no senior games this coming weekend with the 1XV next back in action away at Crewe and Nantwich on the 9th November