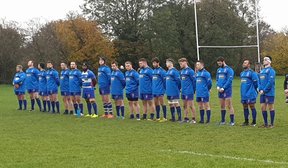 Despite 2 late tries for the home side, the Moorlanders were generally in control of the game and will use the week's training now to get ready for the top of the table clash with Wolverhampton at Esterchem Park on Saturday.

The game was preceded by an impressive and solemn Remembrance Day Parade led by the Crewe and Nantwich branches of the Royal British Legion. Congratulations to the whole Vagrants Sports club for organising such a well-attended traditional Poppy Appeal Day. A special rugby match was also being played between a select C&N XV and a Combined Services Barbarians team made up of local rugby players who are current servicemen or ex-servicemen.
Please see attached small video of team entrance.

Leek's selection had Sam Hunt, Kini Buli and Jack Newton Taylor starting as the back 3 with James Floyd and Naz Narawa in the centre. Ollie Drew and Isaac Reaney were at half back. Bobby Cheadle, skipper Ed Cheadle and Joe Newton Taylor were in the front row. Luke Hardern and Joel Booth were at lock with Reece Milner at No.8 and George Hunt and Andy McFadden on the flanks.
Dan Needham, Jake Bainbridge and Lewis Dunleavy made up a strong bench which, as it turned out was fully required with Leek suffering early injuries.
It started at the kick off with Andy Mcfadden breaking his fibula in the first contact. It was a pure accident but one which saw the immediate inclusion of Jake Bainbridge to the flank as Andy departed the field to start an 8 week stint of recovery at least.
Despite the recent bad weather the pitch was in good condition and the elements thankfully weren't too intrusive as Leek defended what wind and slope there were in the first half.
C&N opened the scoring on 6 minutes after a strong run into the Leek 22 led to a penalty for not rolling away at the ruck. The kick was successful and C&N led early 3-0.

Leek took the lead on 14 minutes after they won a penalty and kicked for the lineout just inside C&N's 22 on the left. The powerful driving maul was stopped illegally and the 5 metre scrum was chosen and as Leek's 8 drove to the line the referee awarded a penalty try. C&N 3-7 Leek.
On 21 minutes, Naz Narawa was yellow carded for a high tackle but it didn't stop Leek scoring next when on 25 minutes after a ruck on the half way good hands right found Jack Newton Taylor with the ball. His grubber kick to in goal left the wing with a foot race to touch down which he duly won. Sam Hunt couldn't add the conversion but Leek led 3-12.
On 30 minutes, another strong C&N centre break into the Leek 22 led to a ruck on the right but then a knock on prevented a dangerous opportunity from occurring for C&N.
Then Sam Hunt went off injured and Dan Needham came on forcing Leek to make a number of positional changes as Naz Narawa returned from his yellow card.
C&N had 2 penalties late in the half which didn't convert, the latter coming off the post which allowed Leek to collect the ball and kick it dead to end the half holding a 3-12 lead.

Leek now had the wind and slope in favour and it took just 2 minutes of the 2nd half for Reece Milner to score the 3rd try. A penalty for holding on in the tackle allowed Isaac Reaney to kick for the lineout in C&Ns 22. The catch and drive had the forwards near the goal line and then a couple of rucks allowed Dan Needham to feed Isaac Reaney and then Reece Milner crashed over. Isaac Reaney converted and the lead moved to 3-19.
Another 4 minutes and the bonus point try came courtesy of winning the C&N scrum before good hands left culminating in Joel Booth offloading superbly to Kini Buli who ran in from the 22 near the posts. Isaac Reaney converted again and Leek were up to 3-24.
As the final quarter started Leek were applying pressure in the C&N 22 when James Floyd charged down the clearance kick. It forced a scrum for Leek and although Leek's scrum was solid all game, the ball shot out of the side on this one. It caught everyone by surprise bar Dan Needham who collected it sharply and sprinted in to dot down on the line for the 5th try. Isaac Reaney
converted and the score went to 3-33 with 18 minutes to go.

It is fair to say that C&N had competed strongly with Leek up to this point and it was they that ended the stronger scoring 2 tries after good retention and strong running from their loose forwards. Both tries were converted on 76 and 80 minutes to bring the score up to 17-33.
Despite the ending, Leek can be well satisfied with this result and they will know they have to keep this momentum up to compete in this league. The win sees Leek retain top spot with 24 points from 6 games. Wolverhampton beat Stafford 22-16 to move into 2nd place on 21 points having played only 5 games though and so this week's clash at Esterchem Park with Wolverhampton is a big game in the context of the season already. KO is 2.15.
Wins for Camp Hill, Walsall and Tamworth sees those 3 sides move up the table as Burntwood and Moseley Oak fought out a draw.
The fixture against Wolverhampton this week starts a series of 5 home games in a row for Leek including the Intermediate Cup on November 30th.