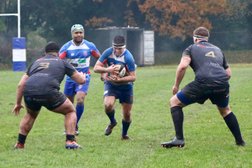 The top of the table clash at Esterchem Park on Saturday produced an epic game worthy of teams at the top….

….and unfortunately for the home supporters the result went the wrong way when it could have been the opposite.

With Sam Hunt injured, Jack Newton Taylor started at full back with Kini Buli and Will Midwinter on the wings. Adam Varley was back in the centre partnering James Floyd. Isaac Reaney and Ollie Drew were at half back.
Bobby Cheadle, Ed Cheadle and Joe Newton Taylor made up the front row with Luke Hardern and Joel Booth at lock. George Hunt, Reece Milner and Billie Kidd were in the back row.
Dan Needham, Jacob Bainbridge and Gavin Randell, making his 1st team debut were on the bench.

After a wet morning, the rain stopped as the game started and from the Wolverhampton kick off a forward knocked on. Leek's scrum on their own 10 metre line on the right led to Isaac Reaney's short pass to James Floyd on the crash ball. He burst through the gap, straightened and fed Adam Varley on the Wolves 22 for the centre to power over the line with less than a minute on the clock for the opening score. Isaac Reaney converted and Leek were 7-0 up with Wolves players perhaps still on the bus.
The game settled down to one of immense pace and counter with both teams looking for the next break and it was Leek which perhaps had the better 2 chances of the half when on 24 minutes a Wolves knock on led to Floyd kicking through with the line begging only to be brought back for the knock on offence and then on 37 minutes, Jack Newton Taylor fielded a clearance on his own 22 and skipped past 6 defenders to the Wolves 22 before a knock on prevented the danger from escalating. Otherwise it had been an even half with both teams tackling superbly in defence, probing with kicks and passing movement at an electrifying pace.
See attached photo of Leek skipper Ed Cheadle probing the Wolves defence supported by Kini Buli - no way through!
The half ended at 7-0 with all to play for.

Perhaps it was unsurprising that the pace dropped throughout the 2nd half as the game slowed with forwards playing a more cautious approach to territory with more rucking and close quarter drives rather than first ball movement along the backs. On 59 minutes, Wolves had begun a phase of play retaining ball and making Leek concede penalties at the ruck when play came all the way to the Leek 5 metre line. Another penalty for off feet at the ruck gave Wolves the penalty option to scrum. The ball was fed blind and the overlap saw the centre sprint in for a deserved try. The conversion was excellent and with the final quarter starting the game was wrapped up at 7 all.
Leek came straight back and 3 minutes later a superb blind side break from Leek man of the match, Isaac Reaney, led to a maul in the Wolves 22 but somehow Wolves came away with the ball and cleared.
On 32 minutes, the decisive decision created the Wolves penalty from which they would win the game. A Leek scrum on their own 10 metre line was won but the Leek 8 were going backwards and the referee penalised the front row for coming up. The long range attempt was superbly struck and with 8 minutes to go Wolves led 7-10.

4 minutes later another Wolves penalty for not releasing in the tackle led to another attempt but it was fluffed. However Leek had 4 minutes to get from their own 22 to the other end to save or win the match and it looked sure as the game entered overtime that Reaney had again provided a great opportunity. His break and pass to Adam Varley had the centre crashing into the last defender on the Wolves 5 metre line but he was penalised for holding on as the Wolves defence superbly got back to prevent a score and so despite the pressure Wolves saw out the game deep in their own 22 to record a great win for them and deny Leek.

Not much was between these 2 sides but with Wolves having a game in hand, it is they that have the upper hand with 7 games gone.
Camp Hill beat Moseley Oak to move to the top of the table but both Wolves and Leek have 25 points along with Camp Hill and Stafford's win at home to Tamworth has them on 24 points, so very close at the top and with Walsall and Longton winning, it is a congested top half of the league. Burntwood had a great win at Newcastle to lift them away from Shrewsbury and Crewe.
This week, Leek welcome local rivals Longton to Esterchem Park for the first league meeting between the 2 sides for over 20 years. There should be a big crowd for this one and with everything to play for, it should be a great occasion. Kick-off is 2.15pm.
Author John McDermott