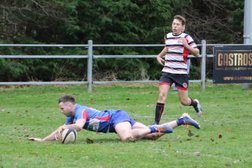 Leek were back on league duty this weekend and scored a 6 tries to 2 victory over Moseley Oak, a side relegated from Midlands 1 last season.

The Leek squad continues to be dogged by unavailability through injury or other yet it still seems to produce a cohesive style and much credit has to go to the coaching and analysing staff which has kept all the players focused this season.
Jack Newton Taylor, Kini Bui and returning Nick Palmer were the back 3. Adam Varley and Sam Hunt were in the centre and Ollie Drew with Isaac Reaney were at half back. Bobby Cheadle, skipper Ed Cheadle and Lewis Dunleavy were in the front row as Joel Booth and Jake Bainbridge started at lock. Matt Tanner started on the flank with Billie Kidd and No.8 Reece Milner made up the back row. Naz Narawa, D J Allen and Tom Scragg were on the bench.

Before the game, a minute's clap was made in remembrance of former Leek 1st team captain Bob Woolley who passed away last weekend. Bob was a keen follower of the side after retiring and he had many friends at the club throughout his long association with it.

The game kicked off with the pitch in good order despite the rain this week and with little wind the conditions were good for running rugby and for the opening half an hour it was all Leek as the Moorlanders built up a 4 try, 2 penalty lead to effectively put the game beyond their visitors. It was a blistering start from the whole team with forwards and backs combining to get into the MO 22. Sam Hunt kicked two early penalties on 4 and 9 minutes to give Leek a 6-0 lead and then 4 tries came quickly enough as Leek kept up the concentration and possession leading to the openings for the scores.
Jack Newton Taylor scored his first try on 13 minutes after a lineout on the left in the MO 22 led to a ruck and then hands right for Taylor to weave his way to the line. Sam Hunt converted and Leek led 13-0.

On 19 minutes an MO 22 drop out found Newton Taylor whose pass to Jake Bainbridge had the lock running into the 22, setting up the ruck before a long pass to Nick Palmer had the wing scoring in the corner. The conversion missed but Leek led 18-0.
On 23 minutes a Leek penalty for offside meant Isaac Reaney could kick for the lineout on MO's 5 metre line on the left. A Catch by Matt Tanner then led to a successful maul and Joel Booth crashed over for his score. The conversion missed but Leek were up to 23-0.
With frustration setting in, the MO No.8 was yellow carded and from the penalty and lineout, Leek's superb handling and rucking on the left meant space for Jack Newton Taylor on the right and he found the space to beat 4 defenders before touching down for his 2nd try. (see attached photo of Jack touching down). Again, the conversion missed but at 28-0 with the bonus point for the 4th try, Leek looked set for a big score with only 30 minutes played.
The home side then lost concentration as they gifted a couple of penalties in their own 22 and then despite good defence, offside decisions allowed MO to work some space and score a deserved try. The conversion missed but at 28-5, Leek needed to wrest the initiative again but couldn't do so as the half ended with MO on the attack.
Leek 28-5 Moseley Oak.

Perhaps half time came at the right time for Leek as they regrouped, made a couple of replacements. However, it was MO starting the half well and were under the Leek posts when Kini Buli was yellow carded for an illegal tackle. This led to a lineout option for MO but in the ensuing attack the ball was dropped on the Leek 22 and a brilliant pick up from Isaac Reaney allowed the young fly half to set up Adam Varley with a long run for the MO posts. The centre went over by the posts on 48 minutes and with Sam Hunt converting Leek were back in control at 35-5.
Leek came close twice to scoring on 51 and 53 minutes but the final ball didn't come until on 73 minutes great work by Reece Milner and Naz Narawa combining got Leek into the MO 22. The ball went right and Tom Scragg, making a welcome return, sprinted in the 6th Leek try. Sam Hunt couldn't convert and Leek were up to 40-5.
Moseley Oak, to their credit, never gave up and although injuries took their toll they tried very hard to break the Leek defensive line and with the final play, set up rucks near the line and the forwards crashed over for a deserved try. The conversion missed and the game ended with a 40-10 score line and a very positive result for Leek.

All 4 sides at the head of the table won with bonus points today. Wolverhampton (1st with 40 points) at Longton (6th with 20 points), Camp Hill (2nd with 35 points) at Shrewsbury and Stafford (3rd with 34 points) at home to Burntwood (7th with 17 points) meaning Leek on 34 points are 4th and level with Stafford 3rd with a better points difference.
In other games, Walsall (5th with 24 points) edged Tamworth (11th with 11 points) by 13-11 and Crewe & Nantwich 10th with 13 points) won at Newcastle (8th with 16 points). Newcastle are the final visitors to Leek this decade this weekend with a 2.15 kick off.
The final league game before Christmas is at Shrewsbury (12th with 5 points) on December 22nd.

In other news, the draw for the RFU Midlands Intermediate Cup has been made which pitches Newark at Leighton Buzzard and Leek at Malvern. The games are to be played on Saturday January 18th.

Leek will be taking a bus to the venue that day with a meet time of 10am at the clubhouse. All non-players are urged to support the club on this day with coach seats available at £10 per head. Please book with Mark Hardern.
Not wishing to pre-empt the result of the semi-finals but the Midlands Final is on Saturday March 14th for those planning that far ahead. It's also the day England plays Wales in the 6 nations and it is possible the Midlands game could be on the Sunday if agreed by all parties.
Author John McDermott