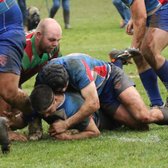 1st XV Double Up With League & Cup Win Over Burntwood

Leek won maximum points on Saturday as they overcame a dogged and competitive Burntwood side scrapping at the foot of the table for survival.

The Moorlanders completed the double over their Staffordshire rivals and in doing so also won through to the Staffordshire Intermediate Cup Final.

Jack Newton Taylor reverted to full back with Kini Buli and Will Midwinter on the wings. Tom Scragg and Nick Palmer were at centre with Isaac Reaney and Ollie Drew at half back.

Bobby Cheadle, Ed Cheadle and Joe Newton Taylor started in the front row with Joel Booth and Jake Bainbridge at lock. Billy Kidd, Reece Milner and George Hunt were in the back row.

Lewis Dunleavy, Andy Thompson and Dan Sharratt were on the bench.

It was a cold, clear windless afternoon at Esterchem Park as Leek kicked off and from an early 2nd minute scrum on Burntwood’s 10 metre line, scored their first points. Reece Milner picked up at No.8 fed Ollie Drew and with Jack Newton Taylor in the line, his pass to right wing Will Midwinter had the youngster racing in from the 22 to score. He missed the conversion but Leek led early 5-0.

Leek had two chances in the next 10 minutes to increase their lead but both times were penalised for holding on near Burntwood’s 5 metre line and then Burntwood got hold of the ball for an extended period with the outside centre making a good break and after forwards and backs combined well they came close to scoring from a ruck on the left but judged held up over the line. From the scrum and further rucks though the flanker finally darted over on 20 minutes to score a deserved try. The conversion was good and Burntwood led 5-7.

4 minutes later and after a great Isaac Reaney kick into the Burntwood 22 forced the wing to carry the ball into touch, the Leek forwards did the rest with a catch and drive from the lineout and Jake Bainbridge crashed over for the score. Will Midwinter converted and Leek led 12-7 on 26 minutes.

Burntwood were very competitive and skilful combining forwards and backs and trying to unlock a stubborn Leek defence and for the next 10 minutes they probed but couldn’t find a way through. Then Leek scrummed on their own 22 and ran the ball wide with Jack Newton Taylor adding the pace to get Reece Milner over half way. Nick Palmer and Tom Scragg added their support before the final ball found left wing Kini Buli with a 20 metre dash for the left corner. It was a great score with a superb conversion from Will Midwinter to increase Leek’s lead to 19-7 on 37 minutes. The half ended with another Leek chance but an obstruction denied the opportunity and half time came with Leek having scored 3 tries at 19-7.

The 2nd half opened with Burntwood securing a penalty and a lineout on Leek’s 5 metre line. Eventually Leek was penalised under the posts for slowing the ball and the penalty was converted to close the gap to 19-10 on 43 minutes.

On 50 minutes, Leek won a penalty for a high tackle and it led to a lineout on Leek’s right on Burntwood’s 5 metre line. The catch and drive then saw skipper Ed Cheadle go over at the back of the maul for the important 4th try. (See Ed’s touch down attached). Will Midwinter converted again and Leek’s lead was up to 26-10.

Leek had a purple patch for 12 minutes from the 64th minute when they scored 4 tries and a 5th was begging. Firstly from a turnover on half way, good passing right against fewer defenders allowed George Hunt to power his way through the last tackle for a good score. The conversion missed. 31-10. Then on 68 minutes with Burntwood attacking Leek’s 22 the ball was dropped, Isaac Reaney hacked on and with 3 Leek players bearing down on the ball it needed just picking up to score. Dan Sharratt kicked ahead one more time but the ball went dead in goal. Then on 70 minutes, a scrum on Burntwood’s 22 led to a few rucks before Burntwood were penalised for offside. An alert Ollie Drew took the quick tap and sprinted in unopposed. The conversion was good and the score moved to 38-10.

From the kick off, a scrappy piece of play in securing the ball led to it skewing out of the ruck backwards. Bobby Cheadle picked up and sent Reece Milner on a great run from his own 22 to the Burntwood 22. He drew the last defender before offloading to George Hunt for the flanker to score his 2nd try of the game. (See George’s try attached) Will Midwinter converted and Leek led 45-10.

Burntwood were tiring now and Leek were looking to run from all over the pitch and on 75 minutes Will Midwinter found himself with the ball, stepping past 2 tacklers and showing the ball nicely to 2 more before passing inside to Billy Kidd who darted in under the posts. Will Midwinter converted and Leek’s man of the match had lifted the Moorlanders past 50 points for the first time this season at 52-10.

Burntwood had the final say with a score on the last play as the forwards drove over the Leek line. The conversion was good and Burntwood can take heart from having played with skill and determination in the face of a team at the other end of the table away from home. They had made life very difficult for Leek and the final score was perhaps flattering but both sides move on to important games next week.

The next 3 games will give a pointer to where the prizes go this season however with Leek away at Camp Hill this week, then Stafford entertain Wolves the week after and then Leek travel to Wolves after the Crewe home match.

Still an exciting last third of the season to go and notwithstanding any of the other 8 teams ability to get a result against the top 4 and with the 6 Nations about to start, there is plenty of entertainment in the clubhouse as well as on the pitch.