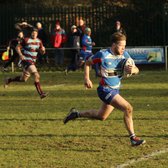 Blues Loose Out At Camp Hill

Leek shared 10 tries with Camp Hill in a quite bizarre game which saw a first half of defencelessness and a 2nd half of possession from the home side and 3 yellow cards for Leek which eventually cost the Moorlanders the match.

Quite a few changes were required for the trip to Haslucks Road on Saturday with Jack Newton Taylor reverting to full back with Kini Buli and Dan Sharratt on the wings. Tom Scragg and George Hunt were in the centre with Ollie Drew and Isaac Reaney at half back.
Bobby Cheadle, Ed Cheadle and Joe Newton Taylor were in the front row and Joel Booth and Jake Bainbridge were at lock. Reece Milner, Billy Kidd and Andy Thompson were in the back row. On the bench, a welcome return for Tom Fairhurst with Lewis Dunleavy and Joe Cooper.

Leek started with a strong blustery wind at their backs and the sun in the eyes of the home side as Camp Hill set about running at Leek. The Moorlanders couldn’t cope with the straight running and strong carries and found themselves 19-0 down with only 22 minutes on the clock.
The openside flanker was causing chaos with his appetite for the ball and his fitness was proving a handful as Leek’s tackling left a lot to be desired. The No8 was also doing the same and the 3rd try came on 22 minutes with him picking up from the base of a scrum and driving over to score. The conversion was good and it was 19-0.
A drubbing looked on the cards for a poor Leek outfit up until then. Fortunately, this season Leek has proven very resilient especially away from home and a remarkable next 15 minutes saw them score 4 unanswered tries to give them a half time lead.
At 19-0, Leek would have taken the 2 league points they earned in defeat but with Andy Thompson scoring the 1st try and Isaac Reaney converting, the comeback gathered momentum quickly as Dan Sharratt went over after Jack Newton Taylor sprinted blind. 19-14. Then Jack Newton Taylor scored his first try moving into the back line and sprinting through poor tackling to score on the left and draw the sides level at 19 all as the conversion missed.
From the kick off, Leek were now looking to run everything and a timely break by Reece Milner allowed George Hunt to skip a tackle and score by the posts and with the conversion good, Leek remarkably led 19-26 and had earned a bonus point try tally as the half time whistle blew.

Leek started the 2nd half with 7 minutes of pressure on the Camp Hill 5 metre line but couldn’t convert and when Camp Hill won a penalty for holding on, they could clear and Leek wouldn’t trouble the home 22 again until virtually the last minute of the game.
In between Camp Hill scored an equalising try after Isaac Reaney was yellow carded and then Andy Thompson went to the bin for a tackle without the ball and Camp Hill’s full back nudged the penalty over to give the home side the lead at 29-26 on 72 minutes.
Finally Joel Booth was yellow carded for a no arm tackle and from the resulting scrum and rucks, the wing came into the line to score under the posts to increase the lead to 36-26 with 5 minutes to go.
Leek wouldn’t lie down though and from a lineout on their own 5 metre line, the backs ran the ball and Jack Newton Taylor wriggled through 2 tacklers on his own 22 before outsprinting all would be defenders for the line.
See attached photo of Jack heading for the line)
The conversion missed but at 36-31, Leek had one more play to steal a win.
Although they tried, a knock on ended the game on halfway and the Moorlanders had to be content with a losing bonus point to go with the try bonus point as their closest rivals Camp Hill picked up the 5 points.

In other games Wolverhampton and Stafford both won and extended their lead over Leek now. However after the week off this week, Leek welcome Crewe to Esterchem Park on the 15th February as Wolverhampton visit Stafford for the top of the table clash and then Leek go to Wolverhampton on the 22nd February. Still everything to play for in the final 7 games of the season as Leek will be looking to keep the pressure on the 3 sides above them.

This week there is no league fixture but the 6 Nations games are on at the club with Scotland v England on the big screen at 4.45pm on Saturday after the Ireland v Wales game at 2.15pm.
Get down to the club and enjoy the great atmosphere with food and drink available all day.