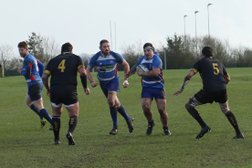 Leek travelled to local rivals Longton on Saturday but couldn’t match their performance against Wolverhampton and were well beaten by a Longton side that has improved throughout the season.

Leek made several changes for this game which saw the return of Lee Williams at prop alongside Ed and Bobby Cheadle in the front row. Joel Booth and Jake Bainbridge were at lock with Billy Kidd, Tom Fairhurst and Reece Milner in the back row. Returning Kini Buli partnered Isaac Reaney at half back. Rob McDermott and Nic Palmer were in the centre and Tom Scragg and Adam Varley were on the wings with Jack Newton Taylor at full back.
Joel Hine , Naz Narawa and Dan Sharratt made up the bench .

Before the game the ground witnessed hail, rain and snow with the gusting wind but as the game started the rain stopped and Leek had the wind with them in the first half.
However, The Moorlanders were unable to take advantage of the elements as the powerful home scrum took control for most of the afternoon.
It took until the 30th minute before the first points were put on the board as the efforts from both sides were impacted by the strong wind. Leek failed to clear the ball with any relief and the ball was run back with determination. A couple of missed tackles allowed a Longton forward to power his way over for the opening score. The conversion missed but Longton had broken the deadlock at 5-0.
Right on half time Longton scored their 2nd try under the posts after some good rucking from their strong forwards and with the conversion, they took a 12-0 lead into the interval.

With the wind against now, Leek stepped up their game at the start of the 2nd half and replacement Naz Narawa, on since the break, scored Leek’s first try with a powerful run after 45 minutes. The conversion missed but Leek were back in the game at 12-5. Leek had a chance to take the momentum from Longton and for the next 20 minutes both sides wrestled for that control but it was Longton on 65 minutes, through their dominant pack, which took the ball with a controlled drive and scored the 3rd try. The successful conversion took the score to 19-5.
Leek regrouped and with some rare continuity the Leek back line, through their power and pace, constructed a well worked try on 70 minutes with the strong running Adam Varley scoring Leek’s 2nd try. The conversion missed but at 19-10 on 70 minutes, there was still time for Leek to grab a point if they could hold on to the ball.
However the final 10 minutes belonged to Longton’s powerful forwards who snuffed Leek out of the game and it was no surprise they scored their 4th try and bonus point with the last play. The conversion was successful to give a final score of 26-10.

The loss still leaves Leek in 4th place with Longton closing on 5th. Camp Hill and Stafford both won with bonus points to move clear of Leek in 2nd and 3rd places respectively as Tamworth’s game with Wolverhampton was postponed.

This week at Esterchem Park, Leek welcomes Crewe and Nantwich for this re-arranged fixture. Kick off should be at 3.00pm but it has been agreed to start at 2.15pm so that the players and all spectators can then watch the England Wales 6 nations game at the club at 4.45pm live on the screens in the club, so please stay for a drink and watch the big clash in the clubhouse.

At this stage, the 2xv and potentially the 3Xv are also playing at home so a busy day of rugby is planned as we hope for some improving weather conditions. Please, keep watching the club facebook and websites for KO times.