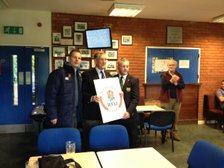 Leek continued their unbeaten run for the season with their 7th league win as they outplayed their visitors in the end to record 10 tries.

On Vice Presidents Day, the news that club stalwart Pete Smallwood had passed away was remembered along with Remembrance of all who had fallen in war with a minute’s silence before the start of the game.

The opening quarter of this match was a huge contest with Leek tending to elaborate the game and producing numerous unforced errors whilst Camp Hill duly defended strongly and made a couple of decent breaks which tested the home defence. Gary McDermott had a 12th minute penalty miss but the game was tight and it wasn’t until the 18th minute that Leek finally broke through when their scrum pushed Camp Hills 8 off their own ball. Luke Staton picked up and set up a ruck on the left.

The ball sped right with full back Dan Smith in the line. Another ruck formed on the Camp Hill 5 metre line and from that lock Ed Harrison crashed over for the first try. Skipper Gary McDermott failed with the conversion but Leek had the first points on the board at 5-0.
On 29 minutes, James Floyd came off his wing and broke through the centre inside the Camp Hill 22. An offside decision allowed Dan Needham to take a quick penalty and Liam McDermott made the Camp Hill line. Ed Cheadle wrestled the ball from the ruck and touched down. Gary McDermott converted and Leek was up to 12-0.

5 minutes later and Andy McFadden won a lineout. This time Gary McDermott made an inside break, drew the full back and passed to brother Liam who went in under the posts. Gary converted and at 19-0 on 35 minutes, Leek had suddenly taken a grip on the game or so it seemed. For Camp Hill hit back and won a penalty for offside in Leek’s 22. They decided to take a quick tap, but repeated rucks failed to break the strong Leek defence. Josh Mays Woodhead took a knock and was replaced by wing Nick Palmer in the centre, allowing Jack Newton Taylor to come on to the wing.

On 40 minutes, Leek won a penalty for deliberate knock on and another quick tap saw Dan Smith on the end of a series of passes to score wide right. McDermott’s fine conversion ended the half with Leek on top at 26-0 and a bonus point in the bag.

If Leek thought it was going to be an easy ride in the 2nd half they were to be mistaken as Camp Hill were galvanised early on and their No8, who played very well and was a thorn in Leek’s side all game, made a great break deep into Leek’s 22. Only a try saving tackle into touch prevented a Camp Hill score. Still Camp Hill pressed but they couldn’t break through and on 47 minutes a fumble led Leek to counter and following a scrum to Camp Hill, Dan Needham stole a ruck ball. He ran blind, passed to James Wilson and then his inside ball to Ed Harrison saw the big lock score his 2nd try of the day. McDermott missed the conversion but Leek was up to 31-0.

Camp Hill came back and competed strongly until the 63rd minute when Leek won a penalty for throwing the ball away. It led to another charging run from Ed Harrison which eventually led to a weakened blind side defence that allowed Liam McDermott to sprint through for his 2nd try and Leek’s 6th of the day. Gary McDermott converted and it was 38-0.

At this point, Camp Hill’s resolve started to fade and from the next 3 kick offs, Leek scored tries as the tackling fell away and strong runs and support from the Leek forwards created the continuity for Luke Granger, Ed Cheadle and Ed Harrison to score his 3rd try, all converted by Gary McDermott to extend the lead to 59-0.
Finally on 78 minutes, a break from their own 22 saw Jack Newton Taylor heading for the line. He was bravely tackled but the young wing passed off the ground to an advancing Andy McFadden to score under the posts. Gary McDermott converted to end the scoring and the game at 66-0.

Admittedly Camp Hill were a few 1st teamers short, but the Leek squad played hard for the full 80 minutes and can only be praised for their intelligent play and determination. Camp Hill have played well recently and will regard this as a one off bad day.
Big wins for Crewe and Nantwich and Moseley Oak mean the top 3 teams pulled a point further away from 4th placed Ludlow who secured a win against Bridgnorth. Stafford won their first game and Old Salts continues to improve.

Next Saturday is RFU Intermediate Cup 3rd round day. 6 sides from Mids 2 West (N) are in the draw and Leek has the only home tie against Market Harborough from Mids 2 East (S), a division that has 9 teams left in.
Kick off is at 2.15pm.

The following week, November 23rd sees Leek travel to local rivals Crewe and Nantwich. The team, which has led the division from the opening day, will no doubt be favourite to retain their unbeaten run. Leek will need to be at their best to compete and it should be a fantastic game. Please come and support your team, it’s all on the line.