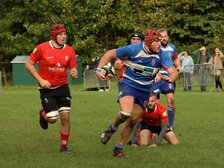 1st XV Triumph In Top of The Table Clash

5 minutes into the 2nd half and Walsall Led

But a terrific 2nd half from the Moorlanders saw them score 4 tries in the final 24 minutes to win the game between the top 2 unbeaten sides in the division.

Jack Newton Taylor was fit enough to start at fullback after his ankle injury in the 1st minute last week at Crewe. He was joined in the back 3 by returning Tom Scragg and Joe Byrne. James Floyd was back in the centre partnership with Rob McDermott. The half backs remained unchanged for the 5th time this season with Dan Needham and Will Midwinter. The same was true of the front row as Bobby and Ed Cheadle and Lee Williams started again. Ben Barlow and Harvey Bullman were at lock with the youthful back row trio of Ollie Powell, Billy Kidd and Joel Hine.
The bench was powerful with returning ex skipper, Luke Hardern back after a lengthy injury together with Liam McDermott and Joel Booth.

Conditions were perfect at Esterchem Park as referee Ewen Leadbetter got the game started and was soon giving Leek a penalty for handling in the ruck outside the Walsall 22 on 9 minutes. Will Midwinter kicked the goal and Leek led early 3-0. 6 minutes later and the first Leek try came after superb handling, ruck retention and continuity including 2 carries by Ollie Powell finally breached the dogged Walsall defence with Will Midwinter scoring the try. He converted as well and Leek were at 10-0 on 15 minutes.
Walsall hit back winning a penalty on 18 minutes for not rolling at the tackle and the well struck penalty gave Walsall their first points. 10-3.

The game was being played at pace with plenty of skill and strong defence on show but when Walsall cleared on 24 minutes, they were caught by another Leek attack starting on their own 22 as Tom Scragg fielded the ball. Rucking and passing up field with Powell again to the fore, the gaps began to appear as the slick passing proved decisive and Rob McDermott finished the move off by the posts. Midwinter converted and Leek were up to 17-3.
The next 17 points were all to be scored by Walsall as they started to get into the game with discipline and strong play.

A penalty on 32 minutes, easily kickable, was turned down for the kick to lineout in the Leek 22 on the left. A few rucks later and the Walsall fly half went over for a try near the posts. He converted and it was 17-10.
On 36 minutes, a high tackle with Walsall on the attack led to a penalty and the 3 points taken brought Walsall to 17-13.
The half ended with Leek pressing but no further points came with the game beautifully poised at 17-13.

The 2nd half opened with Walsall receiving a penalty on 45 minutes for another high tackle and electing for a scrum in the Leek 22, the No.8 picked up and drove for the line. Repelled by a strong defence, the ball reached the line after a couple of further rucks and a try was awarded as the ball was grounded on the line. The conversion was good and the come back from the visitors was complete as they took the lead at 17-20.

The critical turning point in the game then occurred on 48 minutes. A high tackle against Walsall just inside their own half was compounded for another 10 metres with some backchat. It allowed Will Midwinter to kick for touch near the Walsall 5 metre line on the left. Leek then had a series of 4 penalties as Walsall dragged the maul down or for not rolling away. This led to a yellow card on 52 minutes. The next lineout saw Billy Kidd take a brilliant catch and then the driving maul sent Ed Cheadle over for Leek’s 3rd try in the left corner. Midwinter’s conversion was superb and Leek regained the lead at 24-20.

The kick off led to another try for Leek as Rob and Liam McDermott combined down the right to send Tom Scragg deep into the Walsall 22. Walsall struggled to hold the Leek rucks and final quick ball led to a Midwinter long pass to the left and Jack Newton Taylor sprinted over for the 4th and bonus point try. The unerring Midwinter kicked his 4th conversion as Leek extended to 31-20 on 60 minutes.
Will Midwinter then extended the lead with his 2nd successful penalty as Walsall strayed offside on their own 22 on 64 minutes. 34-20.

Walsall needed to throw some caution to the wind now and the lock broke through on 72 minutes with only full back Liam McDermott in his way. The brave full back made the tackle and as the ball sped back along the Walsall line, flanker Billy Kidd picked off the pass and sprinted in from his own half under the posts. The Midwinter conversion extended the lead now to 41-20.
Still Walsall weren’t done as they chased a point and when they scored a try on 80 minutes after a quick tap penalty, then quickly missed the conversion, they reckoned a few minutes were left to score a 4th try. 41-25.

However, at the next play in their own 22, a stray pass led to Leek turning over the ball and Tom Scragg was on the end of the passes in the right corner as Leek scored their 6th try. Will Midwinter ended the day with a magnificent 100% of kicks as the long range conversion succeeded and the game ended at 48-25 for the Moorlanders.

It had been a great game requiring both sides to play their part and with the lead changing hands after half time, it produced 9 tries for the crowd to enjoy.
Still a long way to go this season but Leek became the 3rd side to head the Midlands 2 West (N) division with 25 points. Walsall remain on 20 points and 2nd with Longton in 3rd place on 18 points following their win against Crewe.
Leek welcomes Longton to Esterchem Park this Saturday for their most local derby in what is sure to be another intriguing rematch.

This game is also sponsored by Breeze House and Chris Mudd and Co.

The Bonfire Night Spectacular at the club grounds will be held after the game. Gates open at 6.15pm.

Entry is free, donations are gratefully received, parking is controlled on the Wall Lane pitch, so please follow signs and park responsibly where advised.
The fire will be lit at 7.30pm with fireworks display starting soon after.
Please do NOT bring any sparklers.