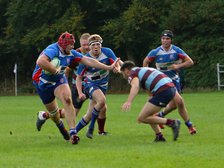 ANOTHER FINE WIN FOR 1st XV

Leek maintained its strong start to the season with another try bonus point win against traditionally tough opposition in Camp Hill after the game was postponed from last week due to a Covid incident.

Jack Newton Taylor, Joe Byrne and Elliot Anderson were in the youthful back 3 contrasted by the experienced duo at centre in Rob McDermott and James Floyd. Dan Needham and Will Midwinter started at half back.
Bobby Cheadle, skipper Ed Cheadle and Lee Williams continued to make up the front row with Ben Barlow and Joel Booth at lock. Joel Hine, Billy Kidd and Ollie Powell were in the back row.
Harvey Bullman, Tom Fairhurst and the returning Liam McDermott were on the bench.

It was perfect conditions for rugby as the game kicked off with Camp Hill making the early running as Leek defended their line and eventually clearing danger after a 5 minute spell where the visitors looked likely to score. Leek then won a penalty on 7 minutes for not rolling away at the ruck and Midwinter kicked for the lineout on the left. A couple of rucks later as the ball moved right and James Floyd broke a tackle and fed Elliot Anderson who sprinted over and under the posts for the opening try. Will Midwinter converted and Leek led 7-0.
On 16 minutes, Camp Hill won a penalty on Leek 5 metre line after the No.8 picked up from the back of the scrum and bore down on the line. The option was for the kick and its success brought camp Hill to 7-3.

From the kick off, Leek retained the ball and successive rucks drove the forwards to the Camp Hill 5 metre line. They won a penalty from an ensuing scrum for not keeping it straight and Will Midwinter converted to give Leek a 10-3 lead.
With 34 minutes gone, Dan Needham kicked a superb 50/22 handing Leek a lineout in the Camp Hill 22. This led to pressure on the 5 metre line with Leek looking likely to score but a dropped pass enabled a swift counter and only a touch down prevented a score. However from the goal line drop out, Camp Hill scored with a combination down the right amid some poor defence from Leek. The conversion was good and it was 10 all.

At the try, Jack Newton Taylor was yellow carded but 2 minutes before half time and a clearance kick from Camp Hill only found Rob McDermott on his own 10 metre line. His catch and break caught the defence napping and only a knock on prevented a certain score as Will Midwinter grasped for the ball. From the scrum, Camp Hill cleared and then won Leek’s lineout near halfway but as the ball sped along the backs, James Floyd’s anticipation gave him an interception pass and he flew in under the posts as the half time whistle went following the simple Midwinter conversion.

5 minutes into the 2nd half and Leek increased its lead with a penalty as Camp Hill sealed off the ruck. Midwinter pushing Leek to a 20-10 lead.
With Newton Taylor restored, Elliot Anderson then scored his 2nd try after a Leek scrum on their own 22. Rob McDermott made a 50 metre break swerving and dummying deep into the visitors half before passing to Anderson who sprinted in again by the posts. Will Midwinter converted and Leek were up to 27-10 on 49 minutes.

Leek’s newcomer, Harvey Bullman was on at lock and immediately made an impression as Leek took a scrum against the head, leading to a penalty and lineout in Camp Hill’s 22. Elliot Anderson looked like he had scored again but was hauled back for double movement as Leek started to dominate the game and it wasn’t long before the 4th try came on 51 minutes. From the penalty for the double movement, Camp Hill cleared the ball but then was penalised at the line for a dummied throw. Joel Booth and then Harvey Bullman combined as the big lock broke the tackle deep in the 22 and offloaded to Billy Kidd who went over for a deserved try. See attached photo. Will Midwinter converted and at 34-10, Leek was in complete control of the game with just under a quarter to go.

Signal a Camp Hill revival then, and it duly came immediately after a clearance kick from the kick off only found the outside centre. He combined with the left wing who then set up ruck phases leading to an overlap and try. The conversion was good and at 34-17, Camp Hill were looking at 2 more tries for a bonus point and 3 to win the game with plenty of time to go.
So, when on 76 minutes, their 3rd try came from a scrum on half way from which the No.8 picked up and sprinted in avoiding all pursuers, the deficit was only 10 points at 34-24 with the successful conversion. Leek needed to steady the ship and 3 minutes later, the game was effectively put beyond the visitors when Jack Newton Taylor scored Leek’s 5th try with a dogged run, shrugging off tackles and showing great speed. Will Midwinter converted his 5th try to increase Leek’s score to 41-24.

Not to be denied a try bonus point, back came Camp Hill and worked a try on the left with great support and a deserved try by the full back. The conversion was missed and the game ended with a final score line of 41-29.
Not unlike previous Leek - Camp Hill matches, plenty of endeavour leading to plenty of tries, it gave the spectators some great afternoon’s entertainment and if Leek can maintain their attacking instincts, the youngsters now embedded in the side will only grow in confidence even as they face tough opponents like Camp Hill. Still a lot to work on, as head coach Joel Booth knows, but his experience is giving Leek a great boost at the start of the season.

The win maintains 2nd place with a maximum 15 points from 3 games and only a bigger points difference separates the Moorlanders from league leaders Walsall. Walsall are the next visitors to Leek in a couple of weeks’ time, but next week Leek travel to Crewe and Nantwich for what is sure to be another tough battle and after the Cheshire side earned a great cup win at Ashbourne this weekend.
Please come along and support the team.