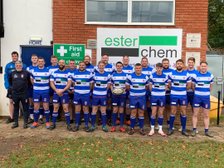 The 2nd league game of the season and the first of the Moorlanders’ away matches had them not travelling very far over the hills to Uttoxeter where the home side was playing its first league game at Oldfields at this level.

Having won promotion as champions from Midlands 3(N) 2 seasons ago, impressed beating Longton in the Staffs cup and competing strongly at Crewe last week, Leek were going to be under no illusions that this would be a tough encounter and so it proved to be with a resilient performance that Leek finally managed to overcome late in the third quarter.

The team showed only one change from last week with youngster Joe Byrne making his debut on the left wing, having come through the mini and junior ranks like 15 others of this 18 man squad.
Jack Newton Taylor and Sam Brereton made up the back 3 with Joe with the experienced pairing of Rob McDermott and James Floyd in the centre. Will Midwinter and Dan Needham were at half back.
Bobby Cheadle, skipper Ed Cheadle and Lee Williams were in the front row with Matt Broad and Ben Barlow at lock. Sam Lloyd, Ollie Powell and Billy Kidd made up the extremely young back row.
Coach, Joel Booth, Joel Hine and Isaac Reaney were on the bench.

The Oldfields pitch has been turned around 90 degrees since Leek last played here and so its length extended with a reasonable slope downfield favouring the hosts first half and with the rain persistent, it was going to be a difficult day handling the ball.
Uttoxeter were out of the blocks quickly as they retained the opening kick off and this led to a penalty for offside on the Leek 10 metre line which was duly punished with an accurate kick after 2 minutes to give Uttoxeter an early lead. 3-0.
A minute later and Sam Lloyd had to leave the field with a bang to the face in the tackle giving Joel Hine an early introduction to the game.

Still Uttoxeter pressed using the kick to keep Leek pinned in their own half but the Moorlanders didn’t concede and on 13 minutes a lineout drive from 5 metres looked like it would be a try but the ball was dropped on the line.
On 25 minutes, Sam Brereton fielded a kick on his own 22 and passed to Jack Newton Taylor who sped off up centre field and into the Uttoxeter half. This led to an offside penalty from which Will Midwinter struck a neat kick to bring the scores level at 3 all.

As the half wound down and Uttoxeter unable to break a solid Leek defence, the Moorlanders won a penalty on 38 minutes. Another 10 metres for back chat meant the kick for the lineout was 5 metres from the Uttoxeter line on the left. This time the catch and drive worked well and debutant Joe Byrne scored a try as his forwards drove over the home goal line.
The conversion just missed from Midwinter but Leek had taken the initiative at just the right moment to lead 3-8 at the half.

4 minutes into the 2nd half and a huge moment which could have changed the course of the match came about when Leek lost a ball on Uttoxeter’s 10 metre line. Turning defence into attack the outside backs combined to send the full back over the line for a score. However in searching for the touchdown under the posts, it allowed James Floyd a chance to tackle and force the fullback over the dead ball line.
Following that let off, a purple patch for Leek led to 3 tries in 11 minutes which settled the game.
On 50 minutes, after a series of rucks close to the Uttoxeter line, Bobby Cheadle crashed over for a try and the conversion was successful by Will Midwinter increasing Leek’s lead to 3-15.

6 minutes later and after a scrum on the left half of the field, great passing and handling allowed an inside pass to Ollie Powell close to the line for him to score Leek’s 3rd try. Another conversion advanced the score to 3-22.

5 minutes later and Leek completed their bonus point set of 4 tries when Isaac Reaney rounded off a move, again off a scrum with the backs combining well. Will Midwinter converted and at 3-29, there was no way back for Uttoxeter.

The rain started to ease as the game entered the final 15 minutes but Leek’s solid defence held firm against a still determined Uttoxeter team and there was no further score.
It had been a very tough, competitive match played in a great spirit and both sides should be congratulated as well as referee Tom Franks who officiated with empathy and understanding.

It’s still early days with only 2 games played and it will take a few more matches for all clubs to find their feet again after the long delay and inevitable changes all have to deal with.

Leek returns to Esterchem park next week as Camp Hill visit in the league. KO 3pm

Leek has also been drawn at home in the 1st round of the Midlands intermediate Cup, which is to be played on Saturday, 16th October against Coalville of Midlands 2 East (N). KO 3pm.

Please get down to the clubhouse for both games to support the team and meet your friends.
Please note it is Ladies day at the club on Saturday. If you want to join in please contact Jenny Booth.