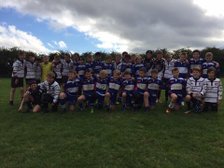 You can't ask for any more

18 Leek players traveled on a filthy Sunday morning to take on Cheshire team Bowdon.
The boys had only played once before in the Wilmslow festival last season where Bowdon came out festival champions.
One 40 minute game was played with rolling substitutes been used at regular intervals.
Leek won the toss and were soon showing their Cheshire neighbors what a strong quick team they are.
Leek took a two try lead early on in the first half.0 -10
Leek seemed to be giving their hosts a bit of a headache as again Leek broke clear again 0-15
Bowdon pulled a try back 5-15 and after the break seemed to change their style of play.
The Leek boys were soon punished after defending their line so bravely Bowdon had reduced their deficit 10-15
In the second half both teams produced some fantastic rugby far beyond their age grade, the play at the break down, ruck and the handling skills was a joy to watch.
The traveling lions sensed victory and in the third quarter of the game took control and piled on the pressure of their hosts with four more hard earned tries10-35.
Bowdon were the best team to date and gave the Lions a great game
Final score Bowdon 10 Leek 35.
Fantastic display boys
Share via
FacebookTwitter
https://www.pitchero.com/clubs
Recent news