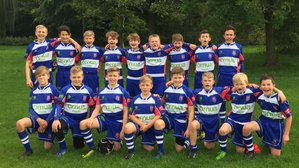 The Leek Lions faced a tough test away at Lichfield.
15 boys travelled and faced a Lichfield squad of 34 boys. 2 games were played with fantastic spirits from all the Leek boys but they faced a huge challenge as their hosts were very well drilled and didn't give the Lions a chance to break their defensive line.
Game 1 Lichfield 3 Leek 0
Game 2 was a similar affair. Leek fought hard and were rewarded with a great try from some brilliant team play.
The boys never dropped their heads and battled to the final whistle.
Final score Lichfield 4 Leek