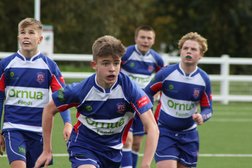 Leek Lions traveled to Walsall and faced their toughest test of the season.
The host club took the early points on the board but leek were dogged and were rewarded with a stunning opening try.
The game was equally balanced with both teams scoring 3 tries in the first half. Leek converted 1 of the tries apposed to Walsall missing their efforts.
The second half was again close with both teams creating scoring opportunities. Leek scored a further two tries both converted. Walsall matched Leek with tries but ended up loosing to the boot.
Leek progress into the semifinals facing either Barton or Tamworth.
Well done boys.
Share via
FacebookTwitter
https://www.pitchero.com/clubs
Recent news