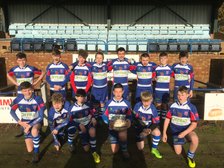 Back to winning ways

The Lions got back to winning ways with a superb performance against Lichfield.
Like the Lions, Lichfield were short on numbers due to injuries and unavailablity 13 a side game was played.
The first half was a thight affair with Leek just going into halftime 2 points behind their hosts.
The second half saw Leek Lions make changes with players moving into more familiar positions. The changes paid off and what followed was a fantastic team performance with wave after wave of attack resulting in the Lions scoring tries.
Lichfield were unable to break the Lions defensive line and the game was played out in the true spirit of rugby with the Lions lending their hosts a player due their injured player having to leave the field.
Share via
FacebookTwitter
https://www.pitchero.com/clubs
Recent news