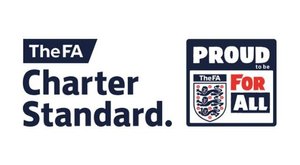 Junior and Welfare 1 of 4

The FA Charter Standard programme is a kitemark, which recognises and rewards high quality levels of provision in club and league football. The kitemark is awarded to clubs and leagues that are well run, sustainable, which place child protection, quality coaching and safety paramount.

The FA Charter Standard kitemark was launched in 2001 and now has 4,500 clubs, with 460 advanced level Community Clubs and 120 leagues. The kitemark is a major focus of The FA’s £200 million FA National Game Strategy and has improved coaching, the number of girls’ football teams and safeguarding children.

Leek Town attained the entry level and was awarded FA Charter Standard in 2011 and was named the Staffordshire FA's Development Club of the Year in both 2012 and 2013. In September 2013 the Blues attained the coveted FA Community Standard award.

Any club can apply for FA Charter Standard status, even a one-team club. The criteria is challenging, but is attainable for every club. Once awarded, FA Charter Standard clubs and leagues are given an annual health check to ensure the standards of provision are maintained.

Criteria for achieving the entry level award include having a trained Welfare Officer, CRB checks for all volunteers, Emergency Aid-trained volunteers linked to each team, Respect programme sign-up, a Level One coach for each youth team, appropriate club administration in place and a volunteer co-ordinator.

The benefits for an FA Charter Standard club include a £100 UMBRO voucher plus 15% kit and equipment discount, free tickets upon application for England youth and women’s internationals, local in-service FA/McDonald’s coaching events, administration support sessions and support with funding applications.

The ‘hidden’ benefits are key to most clubs working towards the kitemark. By achieving an FA Charter Standard Club Award, you are demonstrating to all members, parents, sponsors and the public, that you are a well-organised, safe Club offering opportunities for all.

To apply, clubs must complete an application form and return it to your County FA with the requested supporting evidence. The application will be assessed by the County FA nominated officer. Feedback will be obtained from the leagues that your club plays in to ensure that your club displays the high levels expected of an FA Charter Standard Club.

The FA Charter Standard Working Party will provide feedback on each application, which will include an action plan and a recommendation. If your club meets the criteria, the County FA will forward your application to The FA for awarding. If your club does not meet the criteria, your County FA will provide an action plan and advice.

The kitemark lasts for one season and will be renewed each year as part of the club reaffiliation process. Kitemark awards can be withdrawn if a club has a poor disciplinary record, fails to attend in-service FA Charter Standard events or is unable to continue to meet the criteria.