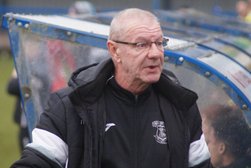 Neil Baker has swooped to make his first two signings of the summer whilst also confirming the retention of most of last season’s squad.

The Blues boss has spent the close season tying up the majority of the side who came so close to securing a play-off place whilst targeting players in specific positions to strengthen the squad.

The first signing is 28-year-old defender Lewis Short who joins the club from Welsh side Bala Town. Lewis is well-known to Baker having been a former professional at Crewe Alexandra before moving on to have spells at Northwich Victoria, Airbus UK, Nantwich Town and Connahs Quay where he played in the Europa League.

Joining Lewis at Harrison Park is 20-year-old prolific striker Tyler Blake. Tyler is a former professional at Mansfield Town, prior to which he was on schoolboy forms at Nottingham Forest. More recently he has spent time on loan with Corby Town, Mickleover Sports, Frickley Athletic and Carlton Town.

Baker commented on his signings, “Lewis is a left sided player that can play left back or higher up the pitch. It’s a position we have prioritised this summer and delighted he chose to come to Leek despite being sought after by clubs higher up the Pyramid.”

“Tyler is an attacking player who again had many choices of clubs. He can play wide or down the middle and his goal scoring record will add to the firepower already at the club.”

The manager is still looking to add one or two more signings to his squad, but has ensured that most of last season’s players have signed for another season, despite interest in all of them from other clubs.

Terms have yet to be finalised with Dan Trickett-Smith, Rob Stevenson and Jordan Johnson, but the Blues boss is hopeful all will agree to sign shortly.

Confirmed as leaving the club are Jordan Lemon who has returned to his former side Spalding United and Sam Grimshaw who has signed for Ashton United. We wish Jordan and Sam all the best and thank them for their efforts whilst at Harrison Park.