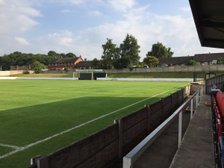 Blues lost their latest pre-season friendly by the odd goal in seven at Congleton Town on Tuesday night.

Once again Leek's management team of Jamie Cullerton and Simon Bell shuffled the pack with another trialist featuring in defence.

Blues got off to a poor start and the Bears went 2-0 up through goals from Youssef Abdullahi and Jason Carey.

However Town pulled a goal back shortly before half-time with a penalty from Jonny Higham and then managed to equalise before the break through a header by Sam Grimshaw.

Congleton went back in front on 63 minutes thanks to Damani Holness and made it 4-2 when Derek Fletcher scored in the 81st minute.

Substitute Tim Grice pulled a goal back a minute later, but Leek were unable to force an equaliser.