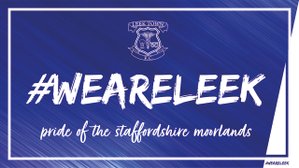 On Friday 8 January 2021 the Club received a letter from League Management Committee of the Pitching In Northern Premier League, the content has been widely discussed and publicised but in a nutshell it stated :

The letter and its contents have been met with different opinions and views across Football.

Jon Eeles, Chairman has stated "A second season declared null & void would be a big flow for non elite football - no recognition for the hard work of the players, management, officials and volunteers and nothing to reward the supporters and sponsors who have been fantastic during a very difficult period."

"I would urge all Clubs to look beyond their own agendas and press forward for a solution to the current problem - there are several alternatives we should consider including a resuming the season when it is safe to do so, a smaller regionalised competition, and combining last season and the current season on a PPG basis. All have been suggested and all have merit. I sincerely hope these options are considered by the FA and that Clubs views are considered before any decision is made."

"I agree that currently, and for the foreseeable short term future, football at our level cannot or should not take place - and playing without fans is wrong for so many reasons. The differing level of Tiers across the UK before the national lockdown did not provide a level playing field and was effecting the integrity of the competition."

"A resumption should only be reconsidered when the virus is under control and a substantial amount of the population have been vaccinated."

"The trading and operating conditions since March 2020 faced by the business community and the football Club have made it an incredibly tough period for all. Id like to take the opportunity to re-assure sponsors and supporters that despite this the Club is in good shape - the fundraising opportunities and operating turnover has been severely impacted by the pandemic but careful financial management means we will be ready to resume when we can."

"I don't think things will ever be the same again following this period, but the Board, the management team and players will be working just has hard - and your support will be more important than ever, stay safe and see you soon."

Tune in to Breakfast on BBC Radio Stoke on 7:45am Tuesday January 2021, where John Acres speaks to Jon Eeles.