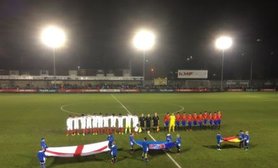 A cracking crowd of 2,132 turned up to see England Under 16's play their Spanish counterparts.

The Spanish side were particularly impressive running out 5-1 winners with a display of slick, passing football.

Spain took the lead early on and were two up at half-time and added a third just after half-time.

The home fans had one moment to cheer when Arsenal's Tyreece John-Jules briefly gave England hope with a header to pull a goal back and make it 3-1.

However, the Spanish side scored twice more late on to complete a comprehensive victory.

The match was a triumph for Blues band of behind-the-scenes staff who all worked exceptionally hard to make sure everything went off without a hitch.

Chairman Jon Eeles paid tribute to them on Twitter saying, 'Massive shout out to all the volunteers today when in difficult circumstances for @leektown pulled it off, without you we are nothing.'