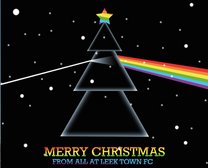 The Club can confirm that after the recent announcement from the NPL regarding the resumption of league fixtures the following games have been confirmed for the Christmas period.

The league fixtures should then resume as normal with previously postponed games being re-arranged for midweek nights or any free Saturdays.

The Club made its best endeavours to play on Saturday and re-arrange a game for Tuesday but without success.

The arrangements for tickets will be released early next week, depending which Tier Staffordshire Moorlands is in after the review. This COULD be limited to home fans only, and with a cap of 200 fans. There will be no Clubhouse, Bar or Tea hut facilities because of the new rules.

By the time Boxing Day arrives it will be 57 days since Leek Town last played at home, when they faced Stocksbridge Park Steels.