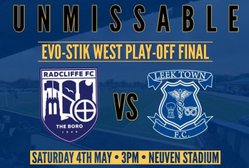 Blues travel to Neuven Stadium on Saturday to take on Radcliffe FC in the EVO-STIK West Play-Off Final, kick-off 3pm.

Blues fans will be hoping it's a case of third time lucky after losing previous finals to Ilkeston FC (2012) and Sutton Coldfield Town (2015).

Radcliffe ended the season a point above Leek with the two sides finishing second and third behind champions Atherton Collieries.

The game however will be played against a backdrop of the possibility that the winner may not actually gain promotion.

Due to continued re-organisation of the Non-League Pyramid, only 5 of the 7 winners of the play-offs across all the division at Step 4 will gain promotion.

These will be decided by the Points Per Game (PPG) record over the season of the 5 winners in their respective leagues and neither Radcliffe nor Leek are in the top five in the PGG table of the fourteen remaining teams.

Therefore both sides will require some results to go their way in the other finals which are spread out over the Bank Holiday weekend, starting on Friday evening and ending on Monday afternoon.

The upshot of this is that although both sides will go into the match still with a definite chance of promotion, the winners may well not know at the final whistle whether they will be promoted and could have to wait until Sunday or Monday to learn their fate.

However, with that out of both team’s control the respective managers will no doubt be telling their sides to go for it and treat it as a ‘normal’ cup final.

Radcliffe have an excellent home record winning thirteen of their nineteen home league games and beating Ramsbottom United3-0 there on Tuesday night in the semi-final.

However, Blues were one of the four teams to win at the Neuven Stadium when they triumphed 3-1 there in February in what was one of Neil Baker’s sides best performance of the season.

That was the second part of a league double for Blues who had beaten Radcliffe 2-1 at Harrison Park in an ill-tempered affair a few weeks earlier.

Baker has some tricky decisions to make in terms of selection with his team having played 120 minutes on Wednesday night.

He could look to freshen things up or change formation as he did successfully at Radcliffe in the league game and he also has to decide whether to give fit-again Tim Grice a start after he created and scored late winners in the last two games after coming on as a substitute.

The match will be decided on the day with extra-time at the end of 90 minutes if the scores are level and then if required a penalty shoot-out.

Those travelling to the game are advised to arrive early as car parking is limited around the ground and be respectful of the local residents in terms of not blocking driveways or access.

Gates will be open from 1pm with admission £8 adults, £5 concessions and in accordance with league rules for the play-offs, £2 for all under 18s.