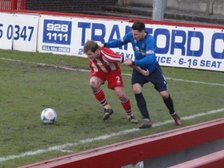 SUPER BLUES AT IT AGAIN

Blues produced another magnificent performance in the FA Trophy to oust another Skrill North side from the competition, the second in five days.

Lee Casswell's men produced the perfect away performance with a 2-1 victory at Altrincham to add another £5,000 from the FA Prize fund to their winnings this season.

Blues started confidently and Niall Maguire had a chance on 6 minutes but fired straight at the keeper.

Blues were still seeing plenty of the ball but not creating many openings, however Danny Smith fired across the goal on 33 minutes.

Two minutes later, Reeves headed over a good chance and Jamie Walshaw put a header wide just before the break.

Town almost took the lead on the stroke of half-time when a good move saw Jordan Johnson's cross met by Andy Kinsey but his shot was blocked.

Three minutes into the second half, Chapman made a fantastic save to tip Greg Wilkinson's shot around the post and he denied the same player on the hour tipping his effort over the crossbar.

The game changed on 65 minutes when Johnson was adjudged to have been brought down in the area by the referee. The home protests were prolonged as they claimed the ball had been won in the tackle but Johnson got up to tuck the spot-kick low into the corner despite the keeper going the right way.

Reeves came close again with eight minutes remaining but Chapman did enough to make him put his effort wide of the post.

Johnson scored again in the first minute of added time sweeping home John Johnston's cross from the right wing to send the 100 or so visting fans delirious.

There was still time for The Robins to hit back with a 25 yard cracker from Wilkinson to make it 2-1 and Blues had to nervously defend a free-kick and a corner before claiming a famous victory.

The draw for the Second Round proper will take place on Monday with the tie to be played on Saturday 14th December.