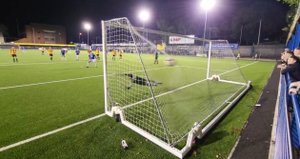 Leek Town picked up their first home league win of the season on a still September night with a 4-1 victory over a Prescot Cables side who certainly played their part in a thoroughly entertaining match full of attacking end to end football, where the score line could have been anything given the number of chances created at either end.

And it was a night of Blues history for the lucky 434 watching spectators as Billy Reeves became the first player for the club to score a hat trick of penalties in a single game, coolly firing home from the spot in the 6th, 11th and 79th minutes.

Manager Neil Baker named an unchanged line up from the previous two games, the win at Mossley and the draw with Kidsgrove, starting with the same front three of Rob Stevenson, Dan Trickett-Smith and Tom Carr who caused problems for the Bulls defence all night with their continuous movement and running across and beyond the defensive line.

An impeccably observed minutes silence was held by both sets of players and spectators in honour and respect for the late Queen Elizabeth II before the Bulls kicked off what was to be an eventful 90mins.

Leek immediately imposed themselves on the game and forced two corners in the very first minute but neither of which came to anything.

The game’s first chance came on 3 mins when Carr and Trickett-Smith combined with a lovely one-two move that released Carr in the area. The young forward delayed getting his shot off allowing a defender to get back and challenge but then seemed to have his heels clipped and went down with the referee waving away the penalty appeals.

He did award the first of Leek’s three penalties a couple of minutes later though when Rob Stevenson’s sharp turn in the area drew a foul from the Bulls full-back Harry Cannon-Noren and Reeves fired the spot kick down the middle to give the Blues the early lead.

Just 5 mins later it was deja vue as Stevenson again had his standing foot taken away by a similar challenge from an over eager Bulls defender and Leek’s second penalty of the night was awarded without any complaints from the visitors. This time Reeves fired the ball into the top corner to give Mitchell Allen no chance in the Cables goal to make it 2-0.

The watching crowd were left wondering how it was not three on 14mins as Leek cut open the Bulls defence with great interplay between Trickett-Smith and Marc Grocott who released Stevenson with a perfectly timed through ball. Stevenson’s effort was saved by Allen, and then in the melee that followed, Reeves had his goal bound effort blocked from inside the 6yd box before Trickett-Smith had a drive that smacked against the inside of the post hit Allen on the back and rolled towards the goal but just the wrong side of the post.

Despite a speculative shot for the visitors from distance by Jack Goodwin comfortably held by Sam Booth Leek continued to dominate the opening quarter of the game. Another flowing move on 21mins resulted in Stevenson playing in Carr, who had timed his run to perfection down the left. However Carr’s side footed effort was too straight and went just wide of Allen’s far post when a little bit of curl would have taken it the other side.

After escaping this opening period with only a two goal deficit Prescot suddenly burst into life and showed their own attacking qualities. A brilliant turn by John Murphy, completely bamboozling Olly Harrison, to create an opening was not matched by his resultant shot which was screwed well wide before Joshua Gregory fired over Booths bar from outside the area as the half hour passed in the game.

Both of Prescot’s full backs were starting to get forward more and beginning to be more instrumental in the away sides attacking moves and a mazy run and cross by Matthew Devine had to be well defended by the Blues back line on 32 mins. The clearance fell to Trickett-Smith who immediately sent Stevenson on the counter attack. Stevenson produced his own mazy run twisting the full back inside and out resulting in a low cross that the on rushing Trickett-Smith could just not get a connection on from a yard out as he slid in at the far post reminiscent of Paul Gascoigne during the Euro 96 semi final against Germany.

Play immediately swung to the other end and another Bulls effort was deflected away to earn them their first corner of the game. The Blues cleared the initial delivery but only to Cannon-Noren who drove forward and drew in 2-3 Leek defenders before squaring the ball to James Device on the edge of the area and he placed a fine low effort into Booths goal with the keeper seemingly unsighted and Prescot were suddenly back in the game on 34mins.

Their tails clearly up the Bulls were back on the attack shortly after the restart and had another effort deflected for a corner. Again, the Leek defence dealt with the initial delivery but the ball was recycled and visiting captain Liam Hollett hit an effort from the edge of the area that produced a stunning save from Booth flying to his right to preserve Leek’s lead.

The pressure and chances for the visitors continued as Adam Hammill had a free kick curl just wide of the upright, before seeing another effort magnificently blocked by Olly Harrison from close range, and then having appeals for a penalty of their own for a shirt tug inside the area dashed by the assistant referree’s flag for offside.

And before a breath taking first half came to a close there was still time for a final Leek attack where a sweetly struck Trickett-Smith volley looked destined for the net before being deflected over.

The second half began as the first did with the Blues immediately on the front foot. On 47 mins Trickett-Smith and Stevenson continued their impressive forward play combining down the Leek left to fashion a chance for Trickett-Smith from short range that Allen managed to push round his near post for a corner.

The efforts on the Prescot goal continued to rack up as the pace and quality of the game remained high and the Blues strove to regain a two goal margin. Harrison had a header fly over over on 51mins, Trickett-Smith saw a fine low effort pushed wide by Allen on 57mins, and Scott Wara had a close range effort blocked inside the 6yd box on 58 mins before Harrison hooked the rebound over the bar.

The decisive third goal came just a minute later however, as the Prescot resistance broke. Again it was Trickett-Smith at the heart of it as he found space in the middle, drove forward, drew the last defender, and slid the ball into the path of the overlapping Tom Carr just at the right time and he made no mistake with a shot that flashed across Allen into the net for a great finish.

The visitors were by no means done yet though as another powerful run by full back Devine teed up a chance for Murphy, but the forwards hesitation allowed a vital block to be made. The resultant corner was cleared and set up a rapid Blues counter attack through Trickett-Smith yet again. Advancing into the area he squared the ball to Carr but with only Allen to beat his shot was straight at the keeper. Following up, Stevenson collected the loose ball and tried to make space for a shot only to go too wide but then recovered to chip the ball just wide of the far post when other options may have been available.

In keeping with the nature of the game play swung to the other end of the pitch and Booth was forced into a flying save from Murphys header following a cross from the Prescot left before Stevenson put his own far post header into the side netting from a Wara cross on the right in Leeks next attack on 72mins.

The attacking ping-pong continued. On 75mins Stevenson, who seemed to have a personal determination to get his name on the scoresheet, tried one of his trademark curled efforts after cutting in from the left but saw it go the wrong side of the post, before the ball went straight up the other end and Booth saved from goalscorer Devine, whilst Wara blocked a follow up effort as the Bulls still sensed a way back into the match.

Their hopes were to be dashed moments later however when Trickett-Smith was brought down by a clumsy challenge from Hollett and the referee awarded Leek’s third spot kick of the night. Reeves stepped up once more and calmly placed his effort to Allen’s left to claim his hat trick and put the game beyond the reach of the visitors with just over 10mins remaining.

There was still to be no respite from the catalogue of chances. Stevenson came close with an effort from 20yds on 82mins whilst at the other end Booth produced another save to deny Jack Goodwin’s direct free kick a minute later. Stevenson then struck the Prescot bar on 87mins with another driven effort from the edge of the area as the Blues forward remained frustrated in his personal quest to get the goal he would have deserved.

As the final whistle blew the applause from the spectators reflected their appreciation of what had been a great watch. It may not be much consolation to the Bulls but they can hold their heads high at their contribution to such a fine match and their attacking play will surely bring them more rewards in their matches to come. As for Leek, this was a much deserved win and the attacking qualities shown will need to be replicated into a tough looking run of away fixtures at Coleshill, in the FA Trophy, and at Workington and Trafford in the league over the next 3 weeks.