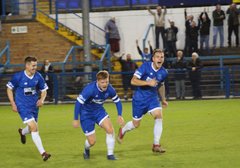 A good midweek crowd of 413 given England’s televised game, and swelled by an impressive vociferous following from Ilkeston, were treated to a fast paced competitively fought match between two in-form teams; Leek boasting a 100% record whilst Ilkeston were undefeated in their last four league games conceding only one goal in the process.

Still missing Marc Grocott (ankle) and Aaron Bott (Calf) Leek manager Neil Baker was forced to make one change to the side from Saturday; with Chris Baker suffering from a dead leg picked up late in the game at Whitchurch, his place being taken by Lewis Short.

Ilkeston made a high energy start, and the front three of Harrod, Bell-Toxtle and Orlando-Young had already shown that they were going to be a threat all night particularly Orlando-Young who gave the Robins the perfect start after 4mins with a sharp left foot finish from just inside the area that left Danny Roberts, in the Leek goal, with no chance at all to save.

Leek tried to hit back immediately with Tim Grice tussling for the ball with both Ilkeston centre halves resulting in the ball breaking to an unmarked Jake Twyford on the edge of the box but he lifted his effort well over the bar.

On 9 minutes Grice had a shot blocked following a good move down Leek’s left hand side, whilst in another attack in the 11th min a cross from Charlie Walford hit the top of the bar and bounced over as Leek started to find their feet and come to terms with Ilkeston’s pressing game.

Ilkeston were always posing a threat on the break and, on 13mins, a mazy run by Reece Fyfe from inside his own half took the ball to the edge of the Leek area where he found Orlando-Young on the right but this time his left foot shot was well over with Roberts untroubled.

Back came Leek and a great wrong-footing turn by Grice, who was winning the early battles with the Ilkeston centre halves, gave him space and opportunity to hit a low effort that was saved by Richard Stainsby down to his left.

Leek’s play and passing continued to improve as the half wore on and they were getting a lot of joy down the flanks of Ilkeston. A number of dangerous crosses were played into the box but the Ilkeston centre halves of Robinson and Freeman showed some excellent defensive positioning to deal with them and snuff out the threat.

Just short of the half hour mark Ilkeston won a free kick some 30 yards out following a foul by Billy Reeves on the effervescent Orlando-Young, however Connor Green’s effort was straight at Roberts who made a comfortable save.

Immediately Leek broke up-field and a great flicked header from Grice freed Rob Stevenson down the right where he found himself in almost the same position in which he had scored a screamer on against Whitchurch. However, on this occasion his powerful shot just went the wrong side of the post and into the side netting.

Leek were forced to make a change after 38 minutes when Josh Agbozo pulled up after what looked like a hamstring injury, with Jesse Bavanganga replacing him.

The stoppage in play resulted in the game calming down slightly as there was little goal mouth action in the run up to the break, with both sides finding encouragement from their first half performance; Ilkeston pleased with their early goal and threat on the break, and Leek encouraged by their recovery from an early set back to begin to dominate the possession and threaten the Ilkeston goal.

Neil Baker made a tactical change at half-time. With Leek’s midfield perhaps looking a little unbalanced with the left-footed Lewis Short having to fill in on the right, Baker brought on Ethan Stanton for his debut.

As Ilkeston had been in the first half, Leek were fast out of the blocks in the second, immediately forcing three corners in quick succession with Darren Chadwick seeing a header over the bar from one of them.

Ilkeston looked to hit back and put the game out of Leek’s reach as Jermain Hollis fired in a low shot on 51mins that went wide of Robert’s right hand post.

Rob Stevenson fashioned a decent chance for himself after 54mins. After winning a challenge with Green some 25yds out he took the ball on and advanced into the right hand side of the area, but then delayed and allowed Green to recover and pressurise his shot resulting in it going wide.

Despite the absence of Grocott and Baker Leek were now controlling the midfield with Stanton slotting in nicely, Charlie Walford putting in a real shift on the left, and Billy Reeves always seeming to be in the right place to pick up the loose ball and start another attack.

On 69 minutes a great long ball from Walford on the left switched the play to Rob Stevenson on the right. His first touch was as good as the pass as it allowed him to take it past Green and again bear down on goal. But credit to Green, who got back and did enough to put Stevenson off his shot. The two of them were having a great personal dual although on 71 minutes Stevenson got the better of Green and cut in from the right. He fed Walford, who put in a fantastic first time cross that Stainsby had to palm away as Grice looked to pounce.

As the game went into the final 15 minutes it looked as if, despite all of Leek’s efforts and pressing, Ilkeston might just manage to hold on and get a classic hard fought 1-0 away win, when the game suddenly turned.

A long hopeful free kick was launched forward from Roberts and one of the Ilkeston centre-halves tried to cushion a back-header to Stainsby. However, Twyford had anticipated the situation and latched onto the ball with his control and first touch taking it round the advancing keeper, who proceeded to completely flatten him with his momentum. This gave the referee no choice but to send Stainsby off and award the clearest penalty he will probably have to do this season.

With no substitute goalkeeper on the Ilkeston bench Thomas Marshall went in goal but had no chance with Darren Chadwick’s firmly struck penalty that, deservedly, brought the Blues level at 1-1 on 78mins

With Ilkeston now down to 10 men and with an outfield player in goal Leek clearly smelt blood and an opportunity to take the 3 points, and that came just 3-4 minutes later.

Following another Leek corner Chadwick was up-ended some 22 yds out as he looked to recycle the ball back into the area. Chadwick took responsibility for the free kick himself, and this was fully justified as he fired the ball low round the wall into the right hand side of the goal beyond the despairing dive of Marshall with 3 sides of Harrison Park erupting in celebration. 2-1 to Leek

The game was not yet won, however, and Leek had Danny Roberts to thank on 86mins as Ilkeston came close to an equaliser. A free kick on the right was driven to the far post and met with a powerful header from one of the Ilkeston players, but Roberts produced a great save to tip the ball over, with the resultant corner being cleared.

3 mins later and Leek should have put the game to bed for good. A poor clearance from Marshall went straight to Twyford who was clean through. However, with only Marshall to beat his low shot found the foot of the post and rebounded to safety.

That was Twyford’s final contribution to the game, being replaced by Harry Goode, as Baker looked to run down the clock and which Leek managed to do with some degree of comfort.

There was still time for some late drama, however, as Alex Marshall (an earlier Ilkeston substitute) was sent off. Marshall had already been warned by the referee seconds earlier for a foul on a Leek player when, in the 93rd minute he followed it up with an awful looking challenge on Darren Chadwick, which led to a bit of a melee between the players. After things had calmed down Marshall was shown a straight red with the referee blowing for full time upon the restart.

So, a hard fought and just about deserved victory for the Blues, which keeps them sitting pretty at the top of the table at this early point of the season. On the balance of play, Ilkeston probably cannot begrudge the win for Leek although they will quite rightly look to the mistake resulting in the penalty and red card that cost them the chance of a positive result. Based on last night it promises to be a just as closely fought encounter in the return match later this season.