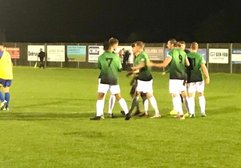 LEEK DRAW AWAY AT STOCKSBRIDGE

In a closely fought match of few outright chances Leek and Stocksbridge shared the points on a mild night at the Steels Bracken Moor home. And whilst the outcome of the match was probably the correct one the Blues will see this as 2 points lost conceding, as they did, in time added on after defending robustly against the pressure exerted by Stocksbridge as they strove for their equaliser.

After being rested for the FA Cup tie at Boston Town at the weekend Tim Grice and Rob Stevenson returned up front in place of Aaron Bott and James Kirby, and Manager Neil Baker chose Chris Baker ahead of Jake Twyford in midfield as he started with a 4-4-2 formation.

Stocksbridge had the first effort of the game after just 2 mins when Steve McDonell tried his luck from distance, but his effort was wide, and a further shot by McDonell was deflected for a corner after 5 mins as the Steels looked to exert their early authority on the game.

However, it was Leek who nearly took an early lead after 8 mins as Tim Grice took the ball down some 30yards from goal, looked up and saw Jacob Carney off his line, and tried an audacious chip over the Stocksbridge keeper, but to the agony of the travelling Blues fans the ball hit the crossbar with Carney stranded.

Stocksbridge were clearly targeting the wide areas with Cameron Foulkes sitting just in front of the Steels defence dictating play and hitting long diagonals to the wings but, generally, the Leek defence were coping well and limiting the Steels to long range shots that were not troubling Danny Roberts.

Similarly, Stocksbridge were able to snuff out Leek’s counterattacks with both defences on top until it took a bit of Rob Stevenson magic to break the deadlock in the 38th min.

Receiving the ball on the right hand side of the box Stevenson seemed to be well marshalled by Robert Ludlam but then used quick feet and body strength to force his way past the defender on the by-line and when he put a low ball across the face of goal Lewis Short found himself unmarked with the simple task of placing a firm side-footed finish high into the net.

Stocksbridge were stunned but carved out their best chance of the half on the stroke of half-time. A free kick was swung in from the right and Liam McFadyen, having found space, stooped low but saw his header just clear the Leek crossbar. From the restart the referee blew his whistle and Leek were 45mins away from a vital 3pts.

The second half began with Stocksbridge immediately putting Leek under pressure, flashing a dangerous cross across the face of goal and forcing 2 corners, but it was Leek who fashioned the first good chance of the half in the 52nd min. From a counterattack Stevenson released Chris Baker down the right and his near post pull back found Grice who shot low but wide.

Stevenson, was again prominent on 57 minutes when, after exchanging headed passes with Lewis Short, he advanced before unleashing a shot from 20 yards that beat the flying Carney but whistled just wide.

After these couple of scares Stocksbridge started to dominate the possession and territorial advantage but, again, without actually creating any clear chances. Leek became guilty of conceding too many soft free kicks out wide and giving the Steels the opportunity to put the ball into the box as much as possible.

Whilst the impressive Darren Chadwick and Olly Simpson remained solid in dealing with what was being thrown at them the law of averages would suggest Stocksbridge would get a chance from one of them and so it happened in the 76th min. A(nother!) free kick from the right produced a goal mouth scramble and resulted in Scott Ruthvens shot smacking against the post before being cleared.

Despite being penned back for long periods Leek had a great chance to put the game out of reach in the 80th min. Grice went on a long run from inside his own half beating one defender and outpacing two others to bear down on goal with just the keeper to beat but, unfortunately. failed to cap what would have been a magnificent individual effort when his shot hit the upright and out for a goal kick.

It would prove to be costly some 11mins later. Stocksbridge had thrown caution to the wind and threw on extra height up front hoping to capitalise on the increasing number of crosses they were putting in from open play and numerous free kicks. It looked as if Leek were just about going to hold on but, as the board went up to show 3mins of added time, Danny Roberts’ goal kick went straight out of play. Stocksbridge took a quick throw-in that looked to be well in advance of where it should have been taken but the play continued and as a high ball came in substitute Recce Fielding became the Stocksbridge hero as his header found the net and the game finished 1-1.

Leek now need to pick themselves up from this late disappointment with yet another testing away trip to Worksop awaiting them on Saturday.