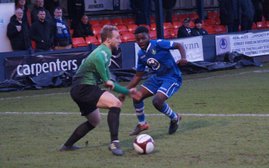 GRAFT EXCEEDS CRAFT AS LEEK GET THE BLUES

On a miserable night for Leek in Stoke on Trent it was Kidsgrove who took early bragging rights by winning the first ‘El Staffico’ derby of the season with the only goal of the game coming directly from a Kyle Diskin corner.

Despite the ideal playing conditions of a still night and a good surface it turned out to be a frenetic game with "graft exceeding craft" and any quality flowing football at a premium; and it was Kidsgrove, with the extra energy and aggression over 90mins, who deserved to take the 3pts although Leek’s cause was significantly hampered by the dismissal of Billy Reeves on 71mins for two yellow cards.

Leek actually had the brighter start to the game and there was an early chance for Tim Grice as Rob Stevenson rode a challenge and played the striker through some 25 yds out from goal but the Kidsgrove defence managed to recover just in time to block the effort.

Shortly afterwards, Harrison in the Kidsgrove goal, was to make the first of two crucial saves in the match as he dived full length to palm a Matt Bell free kick behind for a corner. And then, as the corner came in and was headed on to the far post, Lewis Short saw his effort come off the woodwork before Darren Chadwick’s follow up was charged down.

But that was about it as far as chances created for both sides were concerned until the only goal of the game came out of nowhere on 39mins.

Kidsgrove, through their constant pressing and harassing of the Leek players in possession, had just started to push Leek back down the slope of the pitch and Adu-Gyamfi, who’s pace caused the Blues defence to be on their toes all evening, had just had an effort deflected wide for a corner. Ex-Leek player Diskin whipped in a vicious in-swinging corner with the ball going over everyone and in. A quality delivery, but still a poor goal to concede from a defensive standpoint.

It should have been 2 just a couple of minutes later as, in trying to deal with yet another Kidsgrove long ball forward and head it back to Danny Roberts, Louis Keenan presented the ball to Lovatt. He took the ball around Roberts but then inadvertently missed with the goal at his mercy and Leek were relieved to go into the break only one down.

In almost as carbon copy of the first half, Leek were the better side at the start of the second half and should have equalised after 47 minutes as a mistake by Bergin let in Stevenson. However, after advancing into the box the striker delayed his effort and allowed Thorpe to produce a superb last ditch block, 5 mins later, from a Grice header down to him, Bell fired in an effort from 20 yards that looked to be just too high but Harrison was taking no chances and tipped over for a corner.

Once again, after these initial scares the Kidsgrove players got to grips with their closing down and stifling to keep Leek at bay whilst still providing their own threat through Adu-Gyamfi and further whipped in corners from Diskin, one of which produced a chance at the far post that was headed down but wide.

The game and result was decided in the space of a couple of minutes of action after 70mins. First of all, Will Saxon (a substitute for Keenan) was played through by a lovely ball from Bell that split the Kidsgrove defence. Saxon bore down into the area but didn’t get his shot away early enough and allowed Harrison to produce his second crucial save of the game as he made himself big and blocked the effort.

Then, in a moment of irony given the aggressive approach to the game from Kidsgrove for most of the evening, Billy Reeves picked up a second yellow card for a foul on Adu-Gyamfi and was dismissed.

Down to 10 men, it left the blues with a mountainous task for the last 20mins to try and get back into the game and they were unable to do so as Kidsgrove continued to maintain their high energy levels and show game management to see it through to full time.