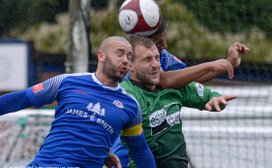 AWAY DAY DRAW AT COLES LANE

Leeks stuttering start to the season continued with an indifferent performance against a battling but average Sutton Coldfield Town side who were far more pleased with the final result than Neil Bakers team. With a number of players struggling to discover the form of last season the Blues were far from the top of their game but still carved out enough chances to have earned them the win rather than the draw they eventually had to settle for.

The starting eleven showed one change from the midweek defeat at Kidsgrove as Leon Ashman came in at centre back to replace the injured Darren Chadwick with Louis Keenan wearing the captains armband.

On the Royals 4G pitch early indications were encouraging as the Blues put together a number of passing moves with Tim Grice holding the ball up well and being well supported from midfield, and it was against the run of play when the first chance of the game fell to Sutton on 8mins with Danny Roberts flying to his left to push away Ben George’s 25 yd effort.

A minute later and the Blues spurned the first of their good chances as a mistake by Royals centre back Zia left Rob Stevenson clean through. However the striker hit his shot straight at keeper Lewis Gwilliams and the ball was deflected just wide of the post.

After this little flurry of action the game settled into a period of play with Leek still trying to play their passing game but being guilty of overplaying it at times and getting caught in possession, whilst the Royals were hitting the ball long into wide areas and trying to build pressure from there.

There were only 2 chances of note created before the break and both were for Leek. On 20mins Billy Reeves did well beating his man towards the right of the Sutton area and playing a low ball in that Stevenson dummied to allow it to roll on to the incoming Lewis Short. Unfortunately Short had to stretch to get on the end of it and, as a result, his effort was steered wide.

Then, on 34mins, another good move down the right with Reeves at the heart of it resulted in Stevenson being played in behind the full back and his cross found Grice at the near post but a great defensive block from his effort resulted in a corner for the Blues. When this was delivered in Olly Harrison headed the ball back into the 6yd box and what can only be described as a goal mouth melee resulted, with the ball ricocheting around and Short, Grice and Stevenson all trying to force the ball over the line with Sutton defenders desperately trying to clear it, which they somehow managed.

Early in the second half Stevenson failed to capitalise on his second clear chance of the match on 49 mins. Grice was freed down the right wing and placed his cross perfectly onto the head of his fellow striker some 8 yds out, but Stevenson’s header was directed straight at Gwilliams.

The miss was punished just a minute later as Sutton took the lead. Stevenson was easily dispossessed to set off a Royals attack down the Leek right which resulted in Harrison doing well to cut out a dangerous cross for a corner. However, as this was played in Roberts failed to get enough on his punch and the ball fell to Zia who rifled it back low through a bunch of players and even through the legs of Marc Grocott, who was on the line, to put the home side ahead.

Leek tried to hit back quickly as Grice tried but failed to get on the end of a Stevenson cross with the goal at his mercy and Matt Bell seeing his 20 yarder fly into the arms of Gwilliams.

The equaliser should have come on 56 mins as one of the Sutton centre half’s misjudged a ball played forward and Grice was through one on one with Gwilliams. Grice hooked the ball past the keeper but saw it come back off the post and then the strikers second effort from the rebound was cleared off the line by the recovering defenders.

Just as it seemed as if it was not to be the Blues day the deserved equaliser came on 59mins. Reeves swung a free kick to the far post where Ashman was able to head the ball back across goal where Bell had the simplest of tasks to head in from a couple of yards out.

If the travelling Blues faithful expected this to be the impetus for their side to go on and claim the win they were to be disappointed.

Once more the passing became disjointed and predictable at times with Sutton being able to break up the Leek play and try to launch counter attacks, and it was from one such counter that they nearly regained the lead as, from another left wing cross, Roberts had to produce his second flying save of the game to prevent Ashmans header going into his own net, and the Leek keeper was forced into another save on 76mins after a slip by Keenan allowed a Sutton forward a chance.

Leek brought on fresh legs in the form of Will Saxon (for Grocott) and Charlie Walford (for Short) as the Blues strove for victory in the final 10mins. A clever quick free kick from Reeves played in Saxon towards the right of the area but no one was able to apply the finishing touch on his low cross that went across the face of goal.

And then, on 89 mins, the final good chance went begging. Stevenson finally managed to get the better of Zia and got close to the byline to play the ball across. Once again there was a scramble in the box and the ball broke to Reeves but the central midfielder was unable to hook his foot around the ball and blazed his effort over when he should have at least hit the target.

Stevenson had another effort blocked on the edge of the box on 93 mins but, overall, it proved to be a frustrating afternoon for Leek in not being able to take the 3pts on offer. As with the Mickleover and Kidsgrove games the Blues conceded from a set piece and were guilty of not taking their chances.