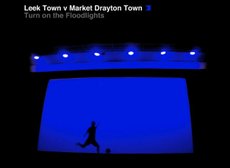 After a struggle in their previous two matches Leek found their shooting boots once more with a comprehensive 6-0 victory over Market Drayton Town with man of the match, Rob Stevenson, being the creator supreme, claiming an assist for five of them.

The Blues were forced into 2 changes from the previous outing against Sutton Coldfield with Billy Reeves serving a one match suspension, following his dismissal at Kidsgrove, and Jesse Bavanganga who was unavailable.

Chris Baker and Jack Wakefield came into the starting line up as Manager Neil Baker chose a line up with three central defenders and Lewis Short and Chris Baker acting as wing backs.

With only a minute on the clock Danny Roberts was forced into a similar save to the one he had to make early in Saturdays game as Market Drayton broke upfield from the first Leek attack of the game and Sam Leyland showed lightning pace to get beyond Olly Harrison and curl in an effort that Roberts flew to his left to push away.

After this early scare Leek started to get into their stride and began to find time and space on the ball to put together a number of good passing moves the first of which came on 6mins and resulted in the opening goal.

A slick four man passing move saw Marc Grocott intercept the ball in midfield, find Baker on the right who played it inside to Matt Bell who then played it into the path of Rob Stevenson on the wing. Stevenson then crossed low into 6yd box for his first assist as Tim Grice applied the finish from close range.

The Gingerbreads tried to hit back and Leyland again posed problems for the Leek backline as he attacked down the right but Roberts was able to comfortably fall on the effort that eventually came in.

Grice thought he had his, and Leek’s, second of the game on 16mins as he poked home the rebound following a Stevenson shot that Sam Agius could only parry but the flag was raised for a narrow offside decision.

Drayton had, by now, started to grow into the game and both possession and territory remained even between the teams up to the break. The Gingerbreads had a couple of free kicks in dangerous locations but Roberts was untroubled by the efforts of Jamie Hands, and also had a curling shot from Lucas Green-Birch well covered as it passed wide of his left hand post on 33mins

From a Drayton perspective it was something of a sucker punch that came on 44mins as Leek doubled their lead just before half time. Stevenson took on and easily beat Matt Jones down the right and delivered a quality whipped cross that the incoming Bell met with a downward header in the net.

Although the first half had seen both sides pretty evenly matched, the difference being Leek’s clinical finishing, it’s fair to say that Leek dominated the second period with Stevenson causing untold trouble for the Gingerbread defence starting in the 51st minute as he powered past Connor Hughes to go one on one with Agius but then shot straight at the keeper who was able to smother the ball.

3mins later and it was the turn of Hughes central defensive partner, Aaron Sims, to be turned inside out by Stevenson as the striker got to the by-line and pull the ball back into the 6yd box where it found its way through a number of bodies sliding in to find Wakefield at the far post and he had the simple task of putting the ball into the net for 3-0.

Neil Baker made the first of his subs soon afterwards giving Charlie Walford some much needed game time at the expense of Lewis Short. Walford was immediately in on the action delivering a peach of a cross that Grice was just unable to get a touch on to steer the ball home whilst, on 69mins, he should have made it 4-0 as his volley from 8 yards smacked against the underside of the bar with the goal gaping following more good work by Stevenson to create the chance.

It was only a couple of minutes before the fourth goal did arrive however, and it was the only goal in which Stevenson did not have a hand. Bell, a strong contender for man of the match himself with an assured display in a more central role in midfield due to Reeves’ absence, curled a fine cross to the far post where Wakefield was able to head the ball back across and find Grice who finished at the second attempt from inside the 6yd box.

Grice must have fancied himself for a hat trick as the Gingerbread Men crumbled under repeated Leek attacks but was substituted on 74mins to give James Kirby some valuable game time and probably had mixed feelings as he saw his replacement help himself to two further goals within the space of 6mins.

His first, and Leek’s fifth, came with his first touch after coming on. Stevenson beat his man for the umpteenth time and delivered a low cross that Kirby tapped home from close range. And then, on 80mins, in virtually a carbon copy Stevenson provided it on plate again as he got his second to make the final score 6-0.

The Ornua Foods Man of the Match - Rob Stevenson