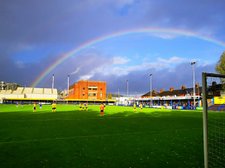 The sell out crowd of 400 saw a game between two evenly matched sides that had a bit of everything; some good passing football, full commitment from both sets of players, bizarre and controversial referring, a missed penalty, a red card and a stirring comeback win for the home side.

Showing just one change from the previous game (Billy Reeves returning to the side to replace the unavailable Matt Bell) Leek began the game with real intent. Some slick passing moves down the right involving Chris Baker and Jack Wakefield and a fine individual run by Rob Stevenson down the left resulted in the delivery of three dangerous crosses into the Cleethorpes area that a Blues shirt could not quite get on the end of.

Another good cross by Baker on 13mins found the head of striker Tim Grice but he got too much contact on his flicked effort and only troubled a watching spectator, rather than the Clee keeper, sending the unfortunate fan’s pie and gravy flying from his hands.

Clee boasted former League player Ross Hannah in their side and, as the Owls started to grow into the game, he was behind most of their attacking moves. A link up with Scott Vernon resulted in Danny Roberts making his first save of the game and then on 26mins the best chance of the game fell to Josh Venney from a Hannah cross. Darren Chadwick’s headed clearance was poor and fell at the feet of Venney but he blazed his effort over.

A minute later and Grice came close to the opening goal for the Blues. Wakefield skipped past his man and Grice met his whipped cross with a glancing header that fell just wide of Theo Richardsons right hand post. The end to end action continued as Clee’s Alhagu Touray Sisay fired a volley well over Roberts bar and then Vernon showed some neat touches before flashing the ball across the face of the Leek goal and beyond the reach of Sisay.

The opening goal eventually came on 41mins. There was a lot of pushing and shoving in the area as a Clee corner came in with a number of players challenging for the ball. Leek failed to clear and Sisay was on hand to fire home from close range. However, the referee had blown his whistle and seemingly disallowed the goal for a free kick, although neither side initially knew who this was for. First of all it appeared to be for Leek, and then as Clee players started to surround him he pointed to the penalty spot. Finally, among all the clamour he then gave the goal!

This was not the first of Mr Robinson’s strange decisions. He had already failed to show a yellow card to Sam Topliss who had dragged down Stevenson who was about to run clear and yet had booked Chris Baker for an innocuous challenge; and it was not to be his last.

Having taken the lead just before half time Clee would have hoped to have seen the game out until the break but only a minute after the goal, Josh Venny put in a reckless challenge on Wakefield that Mr Robinson deemed worthy of a straight red then Harry Middleton was yellow carded for a foul on the same player as the game threatened to boil over.

Half time came to give things a chance to settle down but Cleethorpes now faced playing the whole second half a man short.

The discussion amongst the fans during the break was how Leek have seemed to struggle in the past against 10 men but it appeared not to be the case on this occasion as the Blues pulled level after 52mins with a fine individual goal from Stevenson. Following a good interchange with Baker on the right he used power and pace to beat the Clee full-back and then, cutting into the box, showed deft footwork to fashion a shooting chance and rifled the ball beyond Richardson.

The 10 man ‘curse’, looked to have returned just after the hour mark, however, when Leek lost Stevenson to injury and the Owls retook the lead. Olly Harrison fouled Sisay in a central position and Middletons free kick took a wicked deflection off the wall to leave Roberts wrong footed and unable to get across to make the save as the ball flew into the bottom corner of the net.

Clee once again had something to hold onto and showed some resilient defending against the wave after wave of Leek attacks as the home side tried to get back on level terms, not least on 70mins as defenders desperately threw themselves at the ball to get in vital blocks against Stevenson’s replacement Will Saxon (twice) and Wakefield, before Saxon was unable to get purchase on a header inside the 6yd box from yet another Baker cross.

Manager Neil Baker made an attacking substitution in the 72nd minute, as James Kirby came on to replace Lewis Short but not before being booked by Mr Richardson for apparently entering the field of play too soon, much to everyone’s astonishment?

A minute later and it was the turn of Topliss to produce a brilliant defensive clearance to concede a corner as Reeves delicious cross seemed destined to find Marc Grocot at the far post. Then, when the corner was delivered Mr Robinson was central stage again as he awarded Leek a penalty having seen Wakefield being bundled to the ground.

Last seasons ‘Mr Reliable’ Chadwick failed to convert his second consecutive spot kick of this campaign as Richardson got down low to his left to make the save, however Saxon was first to the rebound to fire home before the Clee keeper could recover and make it 2-2 and potentially set up a grandstand finish with 15 mins remaining.

And so it was to prove, albeit with some controversy. Wakefield must have thought he had been singled out as he was fouled yet again, this time by Vernon some 20 yds out. With the Clee defence expecting a shot Reeves astutely slid a pass to Saxon who delivered a cross that was touched home by Grice to the delight of those behind the goal. A clearly incensed Richardson immediately went running over to the assistant referee along with 2 or 3 team mates claiming Grice used his hand or was offside. They were then joined by Mr Robinson, but after a lengthy discussion between the officials the goal was allowed to stand and the Leek comeback was complete.

There was still a nervy 4-5mins for the home fans to endure as Clee decided to go long ball and threw their big men forward to try and create something. Neil Baker brought on Leon Ashman to counter the threat and he, along with Chadwick and Harrison were able to win a number of important headers. Given Mr Robinsons performance so far, hearts were in mouths as a Clee player went to ground in the penalty area under a challenge by Louis Keenan in stoppage time but play was waved on and shortly after the final whistle blew.

The Ornua Foods Man of the Match - Marc Grocott