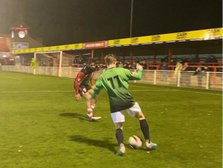 The Blues travelled to Ilkeston knowing this would be their last game for a while, the national lockdown would commence just a few days later meaning a pause for all involved in non elite football until at least December.

Despite losing on Saturday in the FA Trophy, a victory in this game would extend their excellent start to the 2020/21 league campaign with an outside chance of topping the table going into the lockdown.

Neil Baker rotated his squad again with Jessy Bavanganga, Matt Bell, Tim Grice and Will Saxon all returning to the starting eleven, an unusual formation with Bell in a deep holding role with Grice and Saxon as wide front men.

Leek started brightly with Trickett-Smith trying his luck as early as the first minute, but his shot was deflected. Ilkeston immediately hit the channel from the goal kick trying to find the dangerous Alex Troke. Leek continued to move the ball quickly and knocked several longer balls over the top in an effort to expose Ilkestons back line. The midfield were industrious with a high press and this nearly paid off in the 8th minute when Grice was slipped the ball into the box with his fierce shot being smothered by Ross Durrant. Just a minute later Grocott flicked on the ball from midfield to Trickett-Smith in space, he took a brief moment to look up and spotted the keeper off his line, an audacious chip was executed with the ball striking the crossbar with a stranded Durrant looking on.

It was somewhat against the run of play on 10 minutes, when Ilkeston took the lead through Troke. A long ball down the left found Ollie Brown-Hill who beat Bavanganga and slid a low cross to the near post where Troke timed his run to beat Olly Harrison and tap the ball past Danny Roberts. The Blues had switched off for a moment and were punished, this was the 7th league game that they had conceded the first goal.

Leek immediately went on the attack from the restart, with Trickett-Smith and Saxon combining well, a cross flashed across the box just eluding Grice. The resulting corner was delivered with Durrant punching the ball away just before Shotton connected. Minutes later Trickett-Smith collected the ball and was brought down in midfield, his resulting free kick over the bar. Ilkeston then broke with Bennet crossing into the box the headed clearance was met by Thomas whose volley just flew over the crossbar.

Leek continued to press for an equaliser with Grice finding Saxon in the box, his lay back found Trickett-Smith whose shot was just wide, the ball was recycled by Reeves whose deep ball found Grice but his half volley effort did not trouble Durrant.

The game ebbed from end to end and Ilkeston were beginning to test the Blues further - on 35 minutes a Brown-hill freekick was delivered to the far post where Bertram just failed to connect. Minutes later it was Brown-Hill again who tried a long range volley with Danny Roberts producing a great save to tip the ball over. Just before half time a precision ball from Trickett-Smith split the Ilkeston defence to find Grice 1 on 1 with the on rushing Durrant who smothered the shot. Leek would feel slightly unfortunate not to be at least on level terms at the half way point.

There was no let up from Leek in the second half with Trickett-Smith at the centre of Leeks attacking creativity. On 47 minutes Trickett-Smith passed the ball to Saxon who played a neat give and go with Grice resulting in a corner.

The Blues faithful did not have to wait too long for an equaliser, and on 54 minutes it came. Trickett-Smith picked up the ball up in midfield, briefly looked up spotting Durrant off his line, and produced an exquisite lob from his own half which sailed into the Ilkeston net. A goal good enough to grace any game at any level.

Leek needed to consolidate for the next 10 minutes as it was clear Ilkeston would up their work rate. Goodson tried from distance which produced another great save from Roberts to keep Leek in the game, the resulting Brown-Hill corner found Riece Bertram who clipped the bar with his header. A minute later it Brown-Hill raced to the byline and fell to the floor under a challenge from the Leek captain Grocott - the referee was in no mood for tricks and waved away any penalty claims.

Leek had weathered the storm and started to exert more pressure themselves, it was Trickett-Smith again who chipped a ball through the middle to find Grice, his goal bound shot was smothered by Durrant but before it could cross the line Fenton cleared for Ilkeston.

Leek took the lead on 63 minutes when some neat passing in the Ilkeston box laid the ball back to the edge of the area to find the onrushing Grocott, who met the ball with full force with a thunderbolt nestling into the bottom corner of the oppositions goal.

The Blues again would need to endure another rally from Ilkeston where their pressure resulted in three consecutive corners, on 69 minutes it was Bavanganga who was the hero throwing his body in front of a goal bound effort to deny the home side. The Blues should have put the game to bed a minute later as Trickett-Smith once again found Saxon who raced clear and just dragged his shot wide. Almost immediately Ilkeston where on the attack again and Goodson shot only for Bavanganga to block again.

Leek continued their high tempo and Ilkeston were getting frustrated as the ball was passed through the midfield, this resulting in several yellow cards for the hosts. The referee to his credit allowed play to continue and several times pulled play back to award a free kick and yellow card.

On 74 minutes Leek should have extended their league again when Saxon jinked one way and another on the wing before laying the ball back to Reeves, his pin point cross was met by Trickett-Smith whose header sailed over.

The Leek faithful did not have to wait too long for the third goal, an on 79 minutes the Blues swept through the midfield and found Grice wide on the right, in an unfamiliar role as winger he delivered a precision pass to the on rushing Trickett-Smith who made no mistake from close range - the cheers from behind the goal was rapturous as this was no more than Leek deserved.

There was still sometime for drama but Leek managed the game well, Short replaced the mercurial Trickett-Smith and his pace and guile nearly resulted in another goal - Saxon got on the end of a long through ball only to be denied by Durrant again.

Kirby was introduced for Saxon and held the ball up well frustrating the Ilkeston defence, Leek were looking to wind the clock down as the referee indicated 4 added minutes. To their credit Ilkeston never gave up and in stoppage time produced a great goal of their own where Joe Wilson smashed the ball from distance into the roof of the net from distance, normally this would have been the goal of the match but not tonight as that belonged to Trickett-Smiths equaliser.

Shortly after the referee blew the final whistle which was cheered loudly by the Blues supporters, Leek would go into lockdown as league leaders on the Pitching In NPL South East with 19 points from 8 games, as Newcastle Town were defeated by Chasetown.

This was a game to grace any level and will live long in the memory of those who were there, two very competitive teams producing super football - forget the sanitised Premiership - Non Leagues where its at.

Report by More News From Nowhere