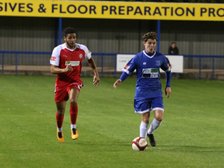 On a mild October night with perfect playing conditions Leek recorded another huge home victory with a 6-2 win over Stocksbridge, but were certainly helped by the visitors pressing the self-destruct button and having two men dismissed either side of half time through ill-disciplined challenges.

Blues manager, Neil Baker, made one change to the side that had won late on in the FA Trophy at Histon at the weekend with Tim Grice returning to the side to replace James Kirby. The game was also notable for seeing the return of Dan Trickett-Smith on the Harrison Park pitch following his loan move from Port Vale.

The game began in a low-key fashion giving no indication of what was to unfold and it was something of a surprise when the opening goal arrived after 8 minutes. Stocksbridge delivered a long throw into the box that was flicked on and Luke Mangham was able to swivel and hook the ball into the far corner of Danny Roberts net to put the Steels ahead.

The goal seemed to sting Leek, and the game into action, as they looked to strike back and immediately won a corner following a good run by Will Saxon. The corner came to nothing but Blues continued to press and, as Louis Keenan swung a ball to the far post, Trickett-Smith produced a deft cushioned volleyed pass to Bell just inside the box and he provided a low right footed finish beyond the dive of Edward Hall to make it 1-1 after 14mins.

Trickett-Smith was at the heart of most of Leek’s attacking moves at this stage and had two long range efforts himself, both taking defections for corners. It was from the second of these corners, on 22mins, that Blues took the lead. Trickett-Smith’s out swinging delivery was met by Bell who placed his header perfectly between the goalkeeper and defender on the line to put the Blues 2-1 up.

Saxon remained lively up front for Leek and was unlucky not to get on the end of a delicious whipped cross from Keenan, as he stretched and just could not get a foot on it to poke the ball home.

Stocksbridge for their part were a big side and, as they had already shown from the long throw, posed a threat at set pieces and it was from such a situation they almost drew level after 40mins. A free kick was curled in from the left and Roberts was forced into a fine save, palming the ball away to his right. From the resultant corner, however, play swung to the other end as Leek produced a rapid counter-attack where Trickett-Smith and Saxon drove forward and exchanged passes before Saxon forced a similar palmed save from Hall.

Stocksbridge then had the first of their players dismissed. Ross Goodwin was booked for hauling back Trickett-Smith as he threatened to break away again on 42mins and then just a minute later showed a complete lack of self-control by lunging into a challenge on Billy Reeves to earn a second yellow and consequently a red card on the stroke of half time.

The second half began with the Steels reduced to nine men almost immediately. Michael Trench produced a Jordan Pickford ‘scissorsesque’ style flying challenge on Billy Reeves and was shown a straight red card by the referee, to give the visitors little hope of salvaging a result from the game. They were still a threat from from set pieces, however, and did fashion a chance from a corner on 50mins that was headed just over Roberts bar.

But for the next 10 mins or so Leek turned the screw and put the game to bed. Trickett-Smith attacked down the right and his cross was deflected towards keeper Hall, but he flapped at the ball and only succeeded in allowing Grice to steer a header beyond him into the net. On 54mins Marc Grocott scored a fine individual, and rare, goal as he won a challenge on the half way line, drove forward, and placed a curling shot into the far corner for which Hall never moved. Then on 61mins Bell delivered a cross into the box that found Saxon with time and space to control the ball and lash a volley high into the net to make it 5-1.

With half an hour still remaining the game as a spectacle was over, and it looked as if it would be a case of not if, but when and how many, Leek would eventually score against their depleted opponents. Grice had another header deflected just wide for a corner and Saxon blazed over from a couple of yards out after Hall had parried another Grice effort.

However, to their credit, and after an impromptu on-field team meeting after one of the Leek goals, the Stocksbridge players acquitted themselves admirably for the remainder of the half. In a 4-3-1 formation they worked hard and succeeded in preventing a complete humiliation on the night. They even managed to pull a goal back on 76mins when a long punt forward found the Leek defence sleeping and Scott Ruthven was able to get to the ball before Darren Chadwick and fire it beyond Roberts to make it 5-2

And as Leek struggled to shrug off the complacency that had, perhaps understandably, set in and failed to pick up the pace once more, former Leek player Jordan Lemon saw his shot blocked after an exchange of passes with Kurtis Turner on 87mins.

However, the final bit of action did see the Blues increase their lead once more in stoppage time. From an attack down the right Reeves released Saxon, and his low cross from the goal line was fired home first time by substitute Lewis Short make the final score 6-2. Definitely a result to please the manager and his background team although maybe tinged with a little concern as to how his side allowed themselves to drop off and lose focus in the latter part of the match.