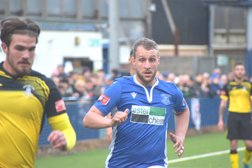 On a mild autumnal Saturday afternoon Leek Town welcomed near neighbours Newcastle Town for a Pitching In NPL West match, it was the official opening ceremony of the new 3G pitch. The Blues were joined by large crowd of 814 and all their partners in the project including the Football Foundation, Staffordshire Moorlands District Council and Staffordshire FA for this great community occasion.

Leek Town old boy, Mark Bright travelled from London to open the new facility, he first played for the Club in the 1980s before joining Port Vale where he signed professional forms, he then had a very successful career playing for Leicester City, Crystal Palace, Sheffield Wednesday and Charlton Athletic before retiring in 1999. Mark is currently a Club Ambassador for Crystal Palace and is an advisor to the main Board.

Leek Town were handed the facility back on 15 October and since that time have had a "soft launch" of running the facility with great success, with over 15 different teams using the new facility since that time. The 3G pitch has been listed on the FA & FIFA register as a pro-star pitch, the highest standard an artificial pitch can be given.

The Blues knew this would be a tough home game for them with Newcastle Town coming into the match in good form in recent weeks with impressive wins over Colne and Prescot Cables. Last Saturday, saw the Blues lose 2-0 away to City of Liverpool FC in the NPL West. Leek had conceded a first half goal on 39 minutes, then in the second period Leek came back into the match but eventually went down a late home second goal. It was a disappointing away performance, and Blues manager Neil Baker was clearly looking to get a more positive home result in the league. Baker was able to pick from a fully fit squad for the match against Newcastle, apart from the ongoing injury to defender Scott Wara.
The game proved to be a great advertisement for the NPL West with both teams giving 100%. A large crowd saw an initially subdued Leek Town side concede to Newcastle in the first period. Then in the second period, the Blues got a Tim Grice equaliser and dominated play but ultimately had to settle with Newcastle Town in an entertaining 1-1 draw.

In an even first half, both teams had half chances to score, notably Danny Trickett-Smith having a couple of good shots well saved by young Newcastle goalkeeper Owen Mooney. Then in the 27 minute, it was experienced forward Nathan Morley of the Castle who scored with a tap in after a slip up in the Blues defence by Lewis Brownhill, Leek 0 – 1 Newcastle. The home team were clearly knocked out of their stride by this break away goal and it was not until the final minutes of the period, that Leek forwards Trickett-Smith and Stevenson had a couple of half decent opportunities easily saved by away keeper Mooney.

In the second period, it was Newcastle Town that had to defend against heavy initial pressure from Leek and within a couple of minutes, Tim Grice equalised with a tap in for the home team after some great build up play from Trickett-Smith & Stevenson. It was now that the number of chances in the goalmouth of the away team began to rise with Grice, Trickett-Smith and Stevenson prominent. On the 56 minute, Leek Town manager Neil Baker made substitutions bringing on Bavanganga and Wakefield in an attempt to get that crucial second goal. The Blues were now totally dominant with Billy Reeves and skipper Marc Grocott increasing the speed of the Leek passing play and create a great Grice chance which was cleared off the line by Mooney. Unbelievably the score was still 1-1 despite the home team seemingly attacking Newcastle at will. Leek seemed had numerous attempts at where a goal looked certain but Mooney would not concede again, the Wigan Athletic loanee easily the man of the match.

However in the final moments, either side could have scored a winner with Newcastle goal scorer Morley having a fine shot saved by home keeper Roberts and then Leek Town seeing a powerful Harrison header clip the woodwork. Somehow the score stayed the same and both sides took a share of the points.

A local derby draw with both teams sharing the points and a fantastic advertisement for Step 4 football.