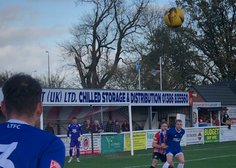 Leek Town exited this seasons FA Trophy 3-2 at Evesham despite a second half fight back after giving themselves too much to do following a poor first 45mins, and finding themselves 3-0 down after an hours play. Harry Franklin was the the home sides hero helping himself to an hat trick with some clinical finishing.

Maybe with one eye on 2 tough away matches to come in the league, at Ilkeston and Spalding respectively, Manager Neil Baker chose to make changes to his starting eleven.

The front two of Tim Grice & Will Saxon were replaced by James Kirby and Rob Stevenson, and Lewis Short started in midfield instead of Matt Bell who was nursing a bit of a groin strain. However, the biggest talking point was at centre half where Baker had made a coup in signing former Stoke City, Derby, Birmingham City and Middlesbrough player Ryan Shotton, currently a free agent, to agree to play for the Blues in the absence of Darren Chadwick.

The additional class of Shotton was there for all to see during the game but even he was powerless to prevent Evesham going into the half time break with a deserved two goal lead as the Robins completely bossed the first half looking sharper and more determined.

The first came on 14mins as a mistake by Leon Ashman, completely misjudging a long ball forward, allowed Franklin to run through and fire the ball low and beyond Danny Roberts and the second came on 24mins as Franklin showed trickery to turn Ashman inside out before rifling the ball past Roberts from a tight angle, high into the net.

Leek could just not get going, often over hitting or completely missing their passes in the blustery conditions, failing to muster a single chance in the whole half, much to the annoyance of the management team.

And the Blues were lucky to go in only 2-0 down as the lively Aaron Bashford had a couple of efforts curled just wide and Franklin just failed to convert at the far post after an excellent cross from the right.

To compound Leeks miserable first half they also lost Stevenson who had to be stretchered off on 45mins with suspected concussion and he was replaced by Will Saxon.

No doubt with Bakers words still stinging their ears the Leek players started the second half looking like a different side and immediately took the game to their hosts.

Will Saxon was put through the middle on 46mins but could only place his left footed effort straight at keeper Lewis Clayton, whilst just 2 mins later Billy Reeves played the ball into the path of Dan Trickett-Smith and his 20yd effort flew over Clayton but came back off the bar.

Marc Grocott then had a similar 20yd attempt just fly over after neat build up play between Kirby and Trickett-Smith on 54mins before Trickett-Smith saw Clayton fly to his right to produce a good save pushing away another goal bound effort.

It was therefore against the run of play that Evesham hit the Blues with a sucker punch of a third goal on 57mins on the break. Bashford showed good footwork with a weaving run to draw in Louis Keenan and Olly Harrison before laying the ball wide and allow an unchallenged cross to be played in that Franklin met with a first time effort low into Roberts net to make it 3-0.

After such an encouraging start to the second half the goal stunned Leek and Roberts was forced into his own flying save to prevent Lorcan Sheehan making it four before the Blues did manage to pull a goal back on 62mins.

Lewis Short delivered a ball in from the left that found its way to Saxon, who advanced and slotted the ball low past Clayton.

Now beginning to find more space Leek continued to press and should have had a second on 68mins when Kirby was denied from close range by Clayton after excellent work by Saxon down the right.

Kirby did get his goal just 2mins later however. Trickett-Smith was onside as he was played through and poked the ball past the onrushing Clayton and Kirby followed the ball in and made sure it crossed the line before a defender could clear it.

At 3-2, and with 20mins left it was definitely game on at this stage as the Blues were in the ascendancy and Evesham looked worried. Kirby looked to have equalised on 73mins following a flowing move down the Leek left started by Harrison, and involving Trickett-Smith & Short, but his effort was narrowly wide from Shorts cross.

Substitute Jessy Bavanganga, on for Ashman, then saw his goal bound effort cleared off the line on 80mins following a scramble from a Leek corner as Evesham’s defending became more desperate.

But then game management kicked in and various time wasting measures were deployed with balls being kicked away and not returned, and the usual delays in taking throw ins and goal kicks, etc. Despite this the officials, who had been poor throughout the game, only deemed 3mins of additional time to be played and Leek were unable to fashion a further chance to take the tie to penalties.