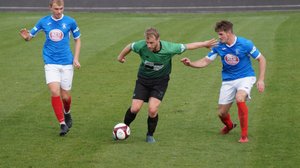 After two consecutive cup defeats in the last week Leek were determined to ensure they did not make it an unfortunate hat trick and, as a result, came away from Newcastle with a positive 5-2 scoreline that underlined their superiority on the day.

And Baker was also forced into an extremely early change when, bizarrely, Captain Darren Chadwick went off injured within the first 60 seconds of the game having not even touched or been anywhere near the ball with bemused Blues fans wondering if this was the first time anyone had injured themselves with the coin toss!!!

Harry Goode came on to replace Chadwick with Walker moving from full back into the centre alongside Olly Harrison.

The early change did not seem to affect Leek who started the game positively and put together some promising passing moves down the right which forced a couple of early corners that Castle did well to defend from testing crosses put in by Louis Keenan.

The Blues actual first effort came on 12 mins as Porter tried his luck from 25yds but his effort was well over Raajan Gills crossbar, and then a minute later as Rob Stevenson cut in from the right a chance opened up for him but his left foot shot lacked power and was comfortably saved by Gill down to his left.

Newcastle were clearly looking to defend and hit Leek on the break using the pace of Ryan McLean and it was McLean who got away down the right after 14mins but Harrison was well positioned to make the clearance when the ball was pulled back.

The opening goal for Leek came shortly after in the 17th min. Stevenson had found space and attacked down the right with his cross being put out for another corner. From the corner the ball was worked to Porter who feinted to cross with his right but turned inside and put in a ball to the far post where Aiden Walker got to the ball before Gill and was able to poke it under him into the net.

Leek continued to push and had a great chance to double their lead just 4 mins later. Once again the move was fashioned down the right where Stevenson played in Goode who’s cross found James Kirby who then teed up Chris Baker some 10yds out but his shot was just over.

Jason Law then had an effort comfortably saved by Gill before Castle again broke away through McLean who ran at the Leek defence and pulled the ball back to Michael Conlon some 8yds out. He looked certain to score before Goode managed to get in a vital block with the ball deflecting for a corner.

McLean proved to be the Castle dangerman once again when, on 32 mins, he took on and beat Keenan but disappointingly pulled his left foot shot wide of the near post giving the Blues a let off.

Leek immediately hit back from the resultant goal kick when a long diagonal ball released Baker down the right. His pull back was perfect for Porter to run onto but his right foot effort was just a fraction over the bar, and Baker was involved again moments later playing a neat one two with Kirby before shooting over as Leek took a deserved lead into the half time break.

The Blues made a blistering start to the second half and practically wrapped up the game within the first 6 mins as they scored twice with the Newcastle players still appearing to be in the dressing room.

On 46mins Walker was unchallenged as he was able to return a Newcastle clearance with a powerful header back to the edge of the box. Kirby brought the ball under control and laid it square to Stevenson who took it round his man and hit a low right footer that Gill got a hand to but could not prevent the ball finding the bottom corner.

Then, on 51mins, a sustained spell of Leek possession resulted in a corner and when this was put to the far post Walker’s header back across goal was against the crossbar and Kirby was on hand to have the simplest task of heading in the rebound from 2yds.

With the game arguably won, the Blues could have been forgiven for stepping off the pace but they did not ease off on their opponents and further opportunities to increase the lead came thick and fast.

On 58mins as Leek pressurised the Castle back line the ball was won and fed to Stevenson on the right. His cross resulted in a goal mouth scramble where first Jason Law had a shot blocked and then, as he ball ricocheted about a defender nearly turned it into his own goal with the ball just going wide of the post.

2 mins later Kirby’s 20yd effort was nearly spilled by Gill into the path of the onrushing Baker but the keeper recovered to smother the ball and then Kirby put a near post header wide from Billy Reeves cross from the right.

On 64mins a slick exchange of one two passing involving the dominant Leek midfield of Porter, impressing on his debut, alongside the consistent Reeves and Baker cut through the Castle defence and resulted in Bakers left foot effort being pushed round the post by Gill.

It was therefore somewhat against the run of play then, that Newcastle pulled a goal back on 73mins when Goode conceded a penalty with a rash challenge. Danny Roberts produced a good save down to his right to deny Nathan Morley but Ethan Cartwright was first to the rebound to put the ball into the net.

The goal didn’t seem to knock Leek out of their stride though and they looked to restore their 3 goal lead. It had nearly came on 77mins when Olly Harrison headed against the bar although the flag had already gone up for offside, but did come on 83mins following a goalkeeping howler from Gill.

As Leek continued to work hard and press the Castle players the ball was played back to him in the area but his touch was far too heavy and went straight to the onrushing Kirby who had the simplest task to roll it past him into the net for his second of the game.

Not to be out done by his strike partner Stevenson also got his second of the match, and Leek’s fifth, as the game approached 90mins, when a long ball forward allowed him to take on and beat the last Castle defender with his pace and he made no mistake with a right foot near post finish past Gill.

Surprisingly there was still time for a further goal as Newcastle scored a late late consolation through Tommy Van Der Laan. A cross was flicked on to the far past and Van Der Laan was unmarked to steer his shot through Roberts legs and into the net.

It proved to be the last kick of an entertaining game as the referee blew for full time immediately afterwards.

So, after a disappointing start to the week the Blues finished it with a comprehensive win against, what has to be said was, an ordinary looking Newcastle side. Neil Baker will be concerned at yet another injury being picked up but will be hopeful of getting back 2-3 players for the next game.

In a quirk of the fixtures Leek return to Newcastle’s Lyme Valley stadium next Saturday as they return to league action and will hope that it’s a case of déjà vu as they look to cement their place amongst the early pacesetters at the top of the league.