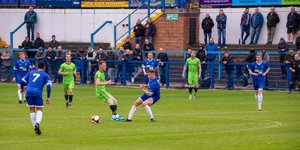 BLUES BOW OUT OF FA CUP AT 3RD QUALIFYING ROUND

Leek Towns FA Cup run came to an end after they succumbed to a superior Kings Lynn side who’s second half performance showed the two league gulf between the teams and led to an eventual comfortable 2-0 victory for the Linnets.

Leek were missing top goal scorer Tim Grice and so James Kirby came into the side which was, otherwise, unchanged from the win over Worksop.

In front of a season best crowd of 790 Leek more than matched their opponents for the first 45 minutes with both sides keeping the ball down, passing well, and producing an entertaining watch.

Danny Robert was the first goalkeeper to be called into action as he made a save down by his near post after an early Kings Lynn raid down the right after 2mins but then there was a scare for his opposing number, Alexander Street, and the Linnets defence after 5 mins when Leek pressed hard and as the ball was played back to Street his clearance was charged down by Billy Reeves 8 yards out but the ball rebounded wide.

The Blues then fashioned a great chance on 13 mins and nearly took the lead. With both sides expecting a long throw in from Lewis Short it was, instead, played short to Reeves. Reeves produced a peach of a whipped in cross and as Olly Harrison and a Linnets defender both lunged for the ball it looped goalwards and looked to be in before Street somehow got a hand underneath it and clawed it away off the goal line.

The Kings Lynn midfield then started to settle and started to dominate possession. The Blues were working hard however and the defence, again being well marshalled by Darren Chadwick were not allowing Kings Lynn to penetrate and create any clear chances. However, Leek did have an escape when a 25 yard free kick was squared to Michael Gash and his low shot gave Danny Roberts no chance but hit the inside of the post and rebounded to safety.

On the half hour mark Leek had maybe the best chance of the half. Reeves put in another quality cross swinging it in with his left foot from the right and James Kirby met it some 8yds out but his gleaned header was straight into the welcome arms of Street when a yard either side could have meant a different outcome.

Leek suffered yet another injury blow on 43mins when Lewis Short had to go off and be replaced by Jake Twyford, who slotted in on the left of midfield. And it was Twyford who was looked to have been fouled as a Kings Lynn forward won a far post header on the stroke of half time but the referee adjudged it a fair challenge and Roberts low save was vital to keep the scores level at the break.

Whilst the first half may have been close, the second was dominated for large periods by Kings Lynn who stepped up their slick passing game and looked as if they had an extra man at times as they controlled the game with the Blues having to work hard to close them down.

However they were certainly helped in their way by an early goal just 2mins after the restart and an error by Roberts who will probably know he should have done better.

Sonny Carey won the ball from Charlie Walford in midfield and hit a powerful dipping shot from some 25-30yds. Roberts looked to be behind the shot but somehow allowed the ball through his hands and into the net to give Kings Lynn the advantage.

Leek looked to hit back and a Twyford got away down the left but chose to cut back in on his right allowing the defence to close down his effort, and then as Leek pressurised the Kings Lynn defence into giving the ball away Kirby tried his luck from 30yds but Street was able to parry the ball down.

The second decisive goal came after 57mins from a Kings Lynn corner. The corner had been won by the impressive Carey who had turned Harry Goode inside out before unleashing a shot that Roberts pushed over. As the corner came in the ball was won by a Kings Lynn player and headed back. Roberts came to punch but failed to get a decent contact under pressure and possibly impeded, and when the ball was eventually laid back to Jordan Richards he produced a tidy finish from inside the area.

The game was as good as over after that as Kings Lynn we’re content to keep possession of the ball for long periods of the half without really forcing anything although they did nearly made it 3 in the 71st minute when Roberts produced a good save low down from another Linnets effort. 2 mins later, however, Chris Baker had a decent chance to pull a goal back when he was played in down the right by Kirby, but the ball wouldn’t seem to settle for him allowing the Linnets defence to close in and his eventual effort was rushed and sailed over Streets bar.

To their credit the Blues continued to work hard, never gave up or lost heart despite the gulf between the 2 teams starting to show and they had a late rally in the final 10 mins through Rob Stevenson down the left. First his low cross found Kirby who teed up Twyford but his shot was poor and easily blocked and then Stevenson went himself, cut inside and hit a right foot effort which a Street comfortably held.

So, although the pre-match music played over the tannoys had been cleverly themed on ‘giants’ and ‘killing’ it was unfortunately not to be for the Blues who can have no real complaints over the final outcome and will wish a good Kings Lynn outfit all the best in the next round.

It’s now from the glamour of the FA Cup to, with due respect, the less glamorous Staffs Senior Cup that Leek now turn as they travel to Chasetown on Tuesday night.