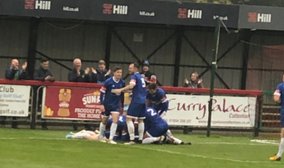 SAXON SEALS IT FOR LEEK

DOMINANT SECOND HALF SEES BLUES THROUGH

With virtually the last kick of the game Will Saxon sealed a 2-1 victory for Leek Town to see them in the 3rd qualifying round of the FA Trophy, few would begrudge Leek their win after a dominant second half display.

With three injuries this week Neil Baker was forced to shuffle the pack with Leon Ashman, Matt Bell, James Kirby & Will Saxon all recalled to the starting eleven.

Leek started brightly with neat passing and possession, however Histon pressed and gave no time to settle on the ball. Histon drew first blood, somewhat against the run of play, on 7 minutes when a fierce, low drive from Danny Gould squirmed under the outstretched Danny Robert’s.

Leek tried to settle down into their usual passing game but the high tempo press and direct approach of Histon was frustrating the Blues, and on 12 minutes this resulted in a yellow card for Ed Rolph whose late challenge left Harrison on the floor. Histon gained some momentum with numerous corners and free kicks and on 16 minutes a cross field ball over Keenan resulted another shot smothered by Roberts. When Leek were allowed to play they looked dangerous but were guilty of overcomplicating their passing on more than once occasion. A line ball down the left from Keenan found Saxon who played a neat one-two with Kirby, he then raced clear and his shot struck the base of the post.

The action ebbed and flowed at both ends with no clear chance until 35 minutes when a good run from Saxon resulted in a cross and glancing header from Kirby which was just wide. Histon finished the stronger of the two sides in the first half with numerous corners and long throws.

Leek were at it from the start of the second half, and benefitted from a slight change in shape with the mercurial Saxon pushed forward with Kirby in a more conventional 4-4-2. As early as the 49th minute Saxon had an opportunity which he just dragged wide, Histon then advanced quickly up the pitch and when another long throw was launched into the box, there were calls for handball but this was waved away by the referee.

Leek built again and played a ball into the industrious Trickett-Smith, who played it back to Billy Reeves and then to Saxon who found Kirby again, his shot resulted in another scramble in the box. A few minutes later another neat move involving Bell and Kirby saw the ball laid back to Tricket-Smith whose shot was just over the bar. Histon were tiring and Leek were seeing much more of the ball, a clever short corner found Grocott on the edge of the box who shot and clipped the outside of the post to the disbelief of the travelling fans.

On 68 minutes the Blues were level, some head tennis in midfield eventually found Kirby who flicked the ball on to Saxon, this time he made no mistake and coolly slid the ball under the advancing Sam Roach. A minute later Leek were lucky again when Ashman crossed, the keeper could only parry under the challenge of Kirby and the fierce shot of Saxon was blocked York.

Histon were clearly tiring as the high press of the first half took its toll, Neil Baker rolled the dice and introduced fresh legs in the form of Charlie Walford and Tim Grice for Matthew Bell and James Kirby, who had put a full shift in.

Leek were now in the full ascendency as they pressed for the winner, however on 82 minutes there was a break from Histon but this petered out. Leek advanced and were awarded a corner which was defended. Grice combined well with Short and was thwarted by another excellent save by Roach. The tie looked to be heading for penalties when right at the death Short found Saxon in the area from the right, his precision shot nestled into the bottom corner of the net to secure the win for Leek.

Heartbreak for Histon but Leek were worthy of the win for their second half performance alone.

Report by More News From Nowhere