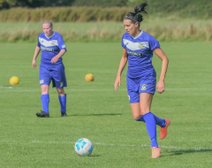 LEEK HELD AT HOME IN A WELL FOUGHT DRAW

Leek hosted a very strong Redditch side, who last season before covid19 postponed the season, competed with Leek for top spot. The away side started brightly and got the first attempt of the game with a looping effort going over the bar. Leek had an attack of their own as a deep cross from the left was played into the area, with Katie Gibbons arriving, but couldn’t reach the end of the cross to head the ball home. Redditch thought they did score if it wasn’t for some superb defending on the line by full back Chloe Brown who bravely blocked the ball with her body. The first goal of the game did come in the 22nd minute to the away side with their striker finishing from close range.
The second half saw the introduction of Michaela Lockett who didn’t take long to get into game as she was played through by Rehanne Mellor from the left hand side, Lockett drove powerfully into the area and fired her shot across the keeper into the far corner of the goal to bring Leek level. The game continued to swing from one side to the other with both teams looking for the winning goal. Leek had the best opportunity as Chloe Brown was played through down the right and drove into the area but saw her effort saved well by the Redditch goalkeeper. The game finished 1-1 in which was a tough and well competed game from both sides.

Player of the Match: Cassie Hyde.