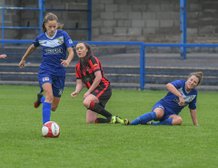 A DOMINANT DISPLAY KEEPS THE LADIES TOP OF THE LEAGUE

Leek Town Ladies were back in league action, as they welcomed local rivals City Of Stoke Women to Harrison Park. The ladies started brightly with numerous attacks before finally getting the opening goal on the 11th minute, as Katie Gibbons played through striker Michaela Lockett, on the left hand side of the 18 yard box, who burst into the box and lashed a fierce shot into the bottom corner of the goal. It quickly became 2-0 to Leek as Kirsty Ryder managed to find herself free in the box to strike the ball past the City of Stoke goalkeeper. Leek continued to control and dominate the game and could have extended their lead further before half time. Just before half time there was a real test for Leeks back four and goalkeeper but with some resolute defending they kept City of Stoke at bay.
Leek started the second half as they did in the first, being on the front foot and did get their third goal of the game, with some fine play down the right as Katie Gibbons released Hollie Chipman, who crossed the ball right into the path of Michaela Lockett to side foot the ball home. Leek made it 4-0 with 20 minutes left to play and possibly a contender for goal of the season, as Gina Rushton tried her luck from 30 yards out, with her effort fly straight into the top left corner of the goal. Moments later leek got their 5th and final goal of the game as substitute Lucy Goodfellow entered the field of play and with seconds later responding quickest to a loose ball inside the area to, after a fine save from City of Stoke goalkeeper who denied Holly Chipman effort of going around her.
The result keeps Leek town top of the league after their dominant display against City of Stoke, who they have now completed a league double over. Leek continue their league campaign as next week (25th October) they host title challengers Suttoncoldfield at Harrison Park.
Squad: Beth Cottrell, Naomi Sale-Hancock, Cassie Hyde, Chloe Brown, Emma Smith, Gina Rushton, Holly Chipman, Lucy Goodfellow, Katie Maya, Michaela Lockett, Rehanne Mellor, Katie Gibbons, Georgia Lawton, Kirsty Ryder.

Player of the Match: Katie Gibbons.