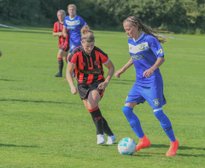 Leek hosted league rivals Sutton Coldfield in a four goal thriller and a game of two halves. Leek started the game brightly keeping possession well and looking to play their way through the opposition but failed to make possession count. Sutton slowly grew into the game and started to threaten Leeks keeper and back four. When they did they were denied by a fine save by Leek keeper Beth Cottrell and a superb block from Chloe Brown on the line. Sutton finally got the opening goal of the game, catching Leek on the break and with suspicion of offside which Leek appealed for, but appeals were waved away, saw Sutton put the ball in the back of the net. Sutton got their second goal of the game, in the 34th minute again on the counter attack after stopping Leeks own attack. Just before half time Leek thought they scored to get back into the game as Kirsty Ryder saw her effort cleared off the line. Unfortunately just before half time as well, Leek lost their striker Michaela Lockett who was stretchered off, after a late heavy challenge from Sutton Coldfields midfielder.

Second half was all about Leek as Chantelle Gallagher was introduced just before half time, with her presence and performance encouraging Leek to get back into the game. It only took 3 minutes into the second half for Leek to get their first, as Gallagher picked up the ball drove towards Sutton’s box and after managing to shrug off her marker and getting half a yard, from long range curled the ball over the keeper into the top left hand corner of the goal. Leek almost made it 2-2 but saw Cassie Hyde headed effort from Katie Maya free kick. In the 75th minute Lucy Goodfellow was introduced after midfielder Holly Chipman could not continue after she received two heavy challenges off Sutton Coldfield defender, just as last week saw her first touch leading to a strike towards the goal but again was cleared off the line well by Sutton’s defender. 86 minutes was played when a throw in was played into Cassie Hyde who did well to hold the ball and drive into the area, where she was brought down by a Sutton defender. Chantelle Gallagher stepped up to hold her nerve to smash the ball into the top corner of the goal to pull Leek level into the game. The result sees Leek go into second in the league but still remain unbeaten.

Player of the match: Katie Maya