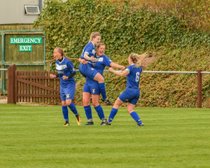 Pleased for the squad and everyone involved. It was the perfect way to end the season.
Ian Smith, Manager

Shifnal started the game well and pushed Leek back for the first few minutes with the Leek defence working hard to keep them out. Leek then attacked down the right flank and Rehanne Mellor got a good cross into the danger area which Chantelle Gallagher headed just wide.
15 minutes in and good work from Michaela Lockett down the left which resulted in her playing the ball to Gallagher. From a tight angle outside the box Gallagher unleashed a screamer of a shot which beat the Shifnal keeper and nestled into the far corner of the net to put Leek 1-0 up.
3 minutes later and the same two players combined again this time with Gallagher feeding Lockett who battled for a 50/50 ball with the keeper before smashing the ball into the net for Leek’s second.
Leek Keeper Hannah Austin was called into action and made a good save from the Shifnal no.10.
Leek were then awarded a free kick on the edge of the box which Gallagher took and hit the bar but Rhian Morris followed up to head home.
32 minutes in and Lacey-May Smith found Gallagher again who made no mistake beating the keeper with a pinpoint effort for Leek’s fourth goal.
Shifnal attacked down the middle and the centre back pairing of Naomi Sale-Hancock and Alana Copeland broke up the play well before playing the ball into midfield.
Good work again by the excellent Katie Maya in midfield before moving the ball on to Gallagher, she in turn found LM Smith and with some good footwork made herself a shooting opportunity and hit the back of the net with another great shot from distance putting Leek into a commanding 5-0 lead.
Shifnal continued to work hard though and got a goal back with a well worked move on the stroke of half time.

Leek made 4 changes at half time and Shifnal were out of the blocks quickly with Leek right back Chloe Brown having to do some excellent interceptions to keep Leek in control.
Shifnal were then almost in on goal but Copeland got a good tackle in before Emma Smith played the ball out of defence to release the pressure. The ball was worked through to Gallagher who found Katie Gibbons running through on goal with a defence splitting pass and Gibbons fired into the roof of the net for 6-1 to Leek.
Again Shifnal did not give up and put Leek under pressure and with a good strike pulled another goal back.
Lucy Goodfellow introduced after half time was seeing plenty of the ball in midfield and found Kirsty Ryder on the right who moved forward at speed but her shot was saved by the Shifnal keeper.
Shifnal attacked down their left side and Alice Painter used her power and speed to break up play and put Leek on the attack again.
The final goal was to come via a good Beth Cottrell run down the left finding the ever willing Gallagher who worked herself a shooting chance and fired home for her hat trick and Leek’s seventh goal.

Leek Town player of the match was given as Naomi Sale-Hancock a true captains performance.