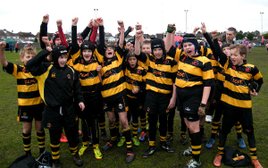 The Lancashire Cup U11s competition started back in November with a series of Group matches that saw Leigh RUFC Dragons U11s team coming runners up in their group and progressing to the finals day which was held on Sunday 6th April at Southport RUFC.

Leigh were dawn in Pool D on the day playing Rochdale, Waterloo ad Fylde with the top two progressing to the semi-finals. The first match against Rochdale was and evenly matched game with both side starting cautiously. Rochdale turned up the heat in the second half but Leigh defence was outstanding and the match finished a draw at 7-7.

After a couple of games rest Leigh took on Waterloo. Again the game was evenly matched with strong defence from both teams and whilst the score line remained 0-0 there was plenty of competitive and exciting rugby. The teams could not be separated and 0-0 was the final score.

Whilst Leigh strong defending had secured two draws from two matches, following the other results, a convincing win was needed in their last group match to secure progression to the next stage of the competition.

The Dragons rose to the challenge beating Fylde 28-0 securing a semi-final spot against Sefton, winners of Pool C.

Leigh were caught off-guard at the start of the match with a quick try by Sefton. Leigh were unperturbed and replied to level the score 7-7. Sefton then showed their strength against a tiring Leigh side scoring several tries to end the first half leading 28-7. The proud Dragons were not beaten yet though and regrouped in the second half to make it 28-14. Sefton remained strong though and went on to score two more tries to finish the game 42-14 and see them progress to the final against Warrington which they went on to win.

The final game of the day was third place play-off against Rochdale the losing team from the other semi-final. This was a re-run of the first game of the day with both teams evenly matched and refusing to give. After an excellent game of rugby both sides could again not be separated and the final score was 14-14 meaning 3rd place in the competition was shared between the two sides.

A fantastic day organised by Southport RUFC, and a fantastic performance by Leigh RUFC Dragon U11, only being beaten by the eventual winners! The target for the season was to develop the team skills and abilities and use the Lancashire Cup as a way of gauging the team’s progress. So to get to the finals days and come 3rd in a competition that covers over 60 U11s teams across Lancashire is a massive achievement. Well done to everyone involved and also congratulations to Sefton, Lancashire Mini Festival Cup U11s winners.