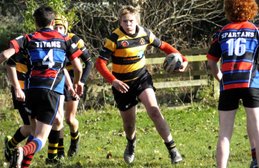 Leigh Dragons travelled into the unknown on Sunday with a first ever visit to Glossop and with only 16 fit players the coaches were nervous of what to expect.

The return of Big Ben M after 18 months out with injury was a major boost for Leigh along with the return of Tane B from his spell in RL.

With 8 regulars missing the team had a different look to it, but from the off the team settled down and controlled the early exchanges.

The forwards were dominating with Danny E, Tane B and Joe M breaking the defensive line at will, brilliantly supported by the strong defence of Fabian W and Harry J and some outstanding rucking by the second row pairing of Ryan C and Oliver N.

The silky skills of the in-form Jack A formed a link between forwards and backs and with the outstanding new half back pairing of Ikey H and Jack M providing quick hands, the outside backs of Tyler B, Leon M, Sam M And Connor C were having a field day. Ben T, in his first game at full back suported everything out wide.

The first half tries came from Joe M, Danny E, Jack M and Jack A with Jack M converting 2 and desperately unlucky with a touchline attempt hitting the crossbar. 0-24 half time.

The second half started a touch scrappily with Leigh overplaying at times. Once they settled down they soon found their rhythm again and it wasnt long before Tyler B scorched down the wing to score a fantastic try. Converted by Jack M.

A slight lapse allowed Glossop/Marple to score in the corner (not happy) but what followed was some of the best open, free flowing rugby seen in a long while. Danny E caused choas, smashing the defence to bits and off loading at will. With magnificent support play from all the team and Big Ben M carrying the ball hard, Leigh were unstoppable. Three tries in quick succession followed, all to the outstanding Tane B who gave one of the best back row displays seen at the Dragons. Jack M converting all 3 for a 17 point haul in total.

A brilliant display from all 16 lads involved. The backs played with superb skill levels with Tyler B strong in his first start at centre and Ikey H outstanding at scrum half with his distribution to the equally impressive Jack M.

All the forwards deserve credit for the way they went about their task. Some brilliant individual performances but as a unit they were magnificent.

Special mention to Tane B for a fantastic effort.

Still got work to do on ball retention and winning turnovers so lets keep working hard boys because without doubt this is the best squad we have ever assembled and the potential is frightening.

Heaton Moor at home next week. Bring it on.