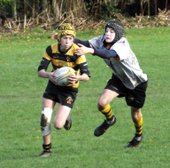 U14's grind it out at Didsbury

Leigh U14's travelled to Didsbury in the 3rd round of the cup looking to keep their impressive form of recent weeks going.

Leigh started strongly and were soon in front on the scoreboard when Tyler B scored yet another trademark try with a blistering run down the left edge. Converted by Jack M. 0-7

Things got even better shortly afterwards when Jack T scored a potential individual try of the season, beating virtually the entire Didsbury team to touch down under the posts. Jack M again converting. 0-14.

From that point things became sloppy and Leigh allowed Toc H back into the game. Too much dropped ball put the team under pressure, only brave defence keeping the opposition at bay.

Eventually Leigh cracked, and Didsbury scored in the corner to make the half time score 5-14.

Despite being in front, harsh words were spoken at half time and the coaches asked for much better ball control and extra sharpness and commitment around the ruck.

The second half started brightly for Leigh and immediately got on the front foot leading to another score for the outstanding Jack T. 5-19

From the re-start, Leigh decided to switch off again and let the ball bounce which Didsbury gratefully collected and worked their way downfield to score. 10-19

After more stern words Leigh upped their game and went toe-to-toe with Toc H and finally started getting the ball in good field position.

After an outstanding move linking forwards and backs, Jack T again crossed, latching on to an unselfish pass from Ben C. 10-24.

With around 5 mins to go Toc H piled on the pressure and camped on the Leigh line looking for a score to set up a grandstand finish. But Leigh stood firm against some strong running and a host of penalties which resulted in forcing a knock on which all the lads celebrated like winning the cup itself.

This changed the flow of the game and from the resulting scrum Tom B was unleashed along the left wing, leaving a trail of defenders in his wake to score under the posts. Jack M converted 10-31.

The referee then indicated that the next play was the last of the game. Leigh received the kick off and kept the ball alive through countless phases of play with incredible skill, culminating in yet another try from Jack T after a massive hand off on the winger.

A good result but key areas to be worked on before next week. Rucks need to be sharper and attacked harder and ball retention must improve. But all in all a great effort against a well drilled Didsbury team.

Special mentions this week to Jack T, not only for his 4 tries but for his laces not coming undone!! To Leon M who in 8 games this season has played, centre, stand off, No 8, second row and hooker and was outstanding again yesterday. Also to Ikey H, playing in an unfamiliar full back role, who is getting better week after week.

Big one next week, LSH at home in cup.