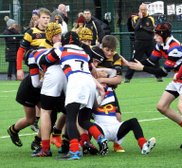 Leigh Dragons took on the familiar opposition of LSH on Sunday in the Lancashire Cup. The game was moved at the last minute to Leigh Sports Village due to the condition of the pitches on Bents.

Both teams were level on points in group B going into the game so it was a must win for both clubs.

The opening stages were tight with some huge hits coming in from both teams. Leigh were struggling to control the ball with too many poor passes leading to knock-ons which kept Leigh under pressure.

The lads dug in and slowly found some field position and got the first score of the game. After a great break down the left from the explosive Tom B, the ball was shifted quickly right to his centre partner Jack T who proved unstoppable from close range. Jack M converting. 7-0.

But Leigh hadn't learned their lesson and more handling errors gave LSH endless possession in the Leigh half, only a magnificent tackle from full back Ikey H keeping the visitors out. The pressure finally told soon after when LSH crashed over in the corner 7-5.

More mistakes followed and Leigh had to defend for their lives, which to be fair, they did magnificently, keeping LSH at bay and getting a foothold in the game.

After working hard to control the ball and gain good field position again Leigh crossed for try number 2. After shifting the ball left Tom B stormed onto a pass and blasted over to score. Jack M again slotting the extras from left of the posts. Half time 14-5.

The second half started in the same manner with the Dragons constantly spilling the ball in good positions allowing pressure to build from LSH. But this is now a TEAM and each Leigh player worked tirelessly in defence to stop their opponents with substitutes Connor C and Harry J throwing themselves into everything.

The next try was crucial and it went the way of the Dragons. Smart play down the left saw Jack T in space and he took the chance with ease, stepping around defenders at will to score his 17th try in just 6 games under the posts. Jack M adding the kick. 21-5.

LSH came roaring straight back with some powerful running and high skill levels and touched down soon after and with the conversion added it was game on at 21-12.

A barrage of attacks came from the visitors with Leigh desperately hanging on. The game changer came when the big, strong LSH winger broke free down the right touchline and headed for the corner. Jack T managed to get back and get a hand to him before Ben T came across and threw everything he had at him, sending everyone flying into touch with an outstanding try saving tackle.

From the scrum, Leigh worked up the field well and yet another shift left gave Tyler B a 1 on 1 situation with his winger. With a step and a turn of pace he was gone and managed to get to the line for a fantastic try near the side line. Jack M completed the scoring with a brilliant conversion from out wide.

A great game played in the right spirit by two good sides and thanks to LSH for their contribution.

It's hard to be critical after such a good win but far too many errors and still a reluctance to go in hard at the ruck.

Special mentions this week to all the squad for rolling their sleeves up and digging in despite things not going to plan.

Wigan on Sunday, should be a cracker.