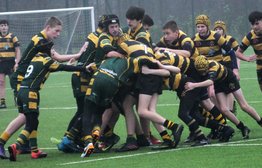 Leigh Dragons continued their fine run of form from the back end of 2016 with a victory over a spirited West Park side in round 6 of the Lancashire Cup.

The late withdrawals of Connor C and Ben T left Leigh with 22 players fit to start in the first game of the new year.

From the off Leigh tore into their opponents and were soon racking up the points with tries from Ethan W, Jack T and Joe M, all scored after some superb handling and strong running. Jack M converting 2 for a 19 -0 lead.

West Park managed to get a foothold in the game when an interception try was scored in the corner but normal service was resumed when Jack T blasted in for his second from a set move from the scrum and Ethan W also made it two with a brilliant finish in the corner. Jack M converting one of these for a half time lead of 31-5.

Seven changes were made at the break but Leigh were straight back at it and Ethan W completed his hat trick after more high quality passing down the line. At 36-5 the cup tie was done and the game continued as a development match.

The final act of the day also brought the biggest cheer. Big Sam M was released down the left wing around 50 yards out.. He flew past one defender and as he approached the line he swatted off a second attempted tackle and brought the ball round near the posts to the delight of the home fans. Leon M slotted the extras to make the final score 43-15.

All-in-all a good effort, some outstanding skill on display but switching off in games like we did will bite us further down the line.

Special mentions this week for Ethan W, on the comeback trail after a serious knee injury and scoring 3 tries, Big Sam for a superb effort and Tom B who chased back the full length of the pitch to save a certain try when the game was already won, a fantastic attitude.

Tough game next week, away at Sefton.